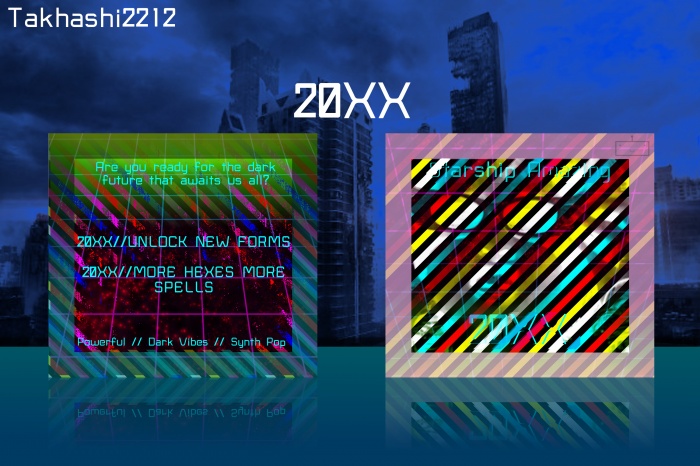 (Posting as a comment because apparently there is a character limit for descriptions.)

Next in a series I like to call "Shit I Make When I Should Be Sleeping", I have 20XX, an album by the band Starship Amazing.

Speaking on the band, the are an indie chiptune/synthpop band, made up of 2 people; Derek Alexander (better known as the Happy Video Game Nerd) and his buddy Calvin Hansen. They make some great songs. Their most famous song is "Ya Burnt" off the album "Ya'll Stop Bloggin". They disbanded in back in January due to Derek moving to Seattle. 20XX was their final EP, and it was a high note to out on.The album is based on the idea of a dystopian future, but still manages to have some great, vibrant, synth tracks. I highly recommend checking out their stuff. They made 15 albums, and 11 are free (technically 16, but they don't like to talk about their rap album), so you really no reason to not check it out.

This actually started as a box for "Girls Just Wanna Have Fun" by Cyndi Lauper, if you can believe that. That's actually Cyndi's face on the front. One thing lead to another, and I liked the design, but didn't feel it felt the source material, so I worked more on it, and it became this.

I made these last two boxes with the idea of experimenting. Experimenting with colors, design, tools, blending, subject matter, etc. I noticed when I made Magical DoReMi boxes back to back that I needed to diversify my range of boxes. So I picked music, a box type on this site I've rarely touched. Even though I don't like Taylor Swift, I used that box to experiment, along with this one. I have this invisible level of quality that I hold my work to (I'm sure most do), but with these, I tried to throw that out of the window and just go wild. Even if these aren't my best work, I can honestly say that 1989 and 20XX were perhaps the boxes I had the most fun making. Just messing around with a real goal end design was loads of fun. I was able to just let loose with design concepts and ideas. Treasure (one of my favorite game companies) has the design philosophy that no idea is too outlandish, too far-fetched, or dumb to be put in a game. I tried to en-capture some of that philosophy when making this box. All I had was a rough image in my head, and even then, that was so vague it gave a lot of freedom. Whether the experiment worked or failed, I had a good time making it.

(Don't really expect anyone to read this wall of text, but if you did, thanks, I guess? Hopefully this didn't get too rambly.)

The year is 20XX. Everyone plays Fox.

Everyone plays to TAS levels of perfection.