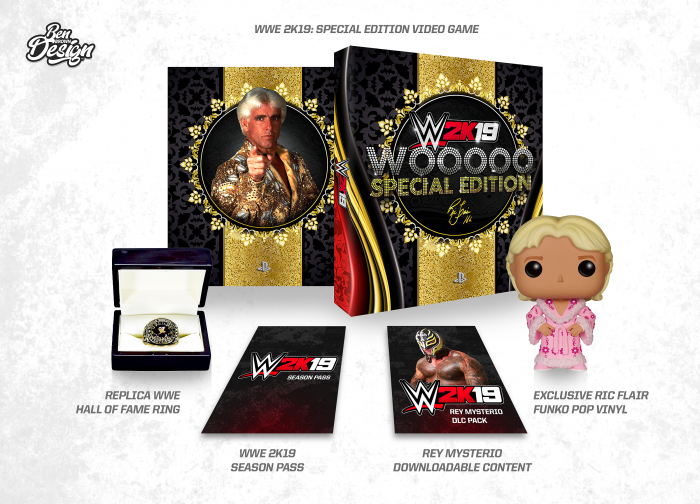 With 2K's announcement earlier today regarding the Wooooo! Edition of WWE 2K19 that highlights the career of Ric Flair, I noticed that they're just housing the bog standard cover in a pretty box with Ric Flair shit on it, and I thought that was a cop out.

Ric Flair is arguably the most decorated professional wrestler of all time and I think he deserves his own cover at least. With that being said, I wanted to create something that summed up Ric Flair and the stylin' and profilin', limousine ridin', jet flyin', kiss stealin', wheelin' dealin' son of a gun he is.

As this is a special collectors edition announcement also, I wanted to create a similar showcase for the cool shit you get with it but add my own touch too.

The logo itself is totally custom and kinda took the piss to make, but I'm really happy with how it came out.

Anyway, thanks for looking, and it wouldn't be Ric Flair related if I didn't end it on a WOOOO!

wow this is cool dude.but I do not like the ornament around the circle need more strict or perhaps without it??if you change the favorite you are provided with..

Dude, I'm confident enough in my own abilities as an artist. I'm all for feedback, but I'm not going to change the little things you don't like because you're dangling a favourite in front of me. I just like to share my work with people, favourites don't really mean anything to me.

@BenBrownDesign regular fellow. this is exactly what I wanted to hear.but there is one problem of flowers around. it looks gay.but if this is what you wanted then this is your right.
PS:maybe it's your gay pride??))))))))))))))))))

@Wolfenstein The Old Make a cover better than what I make and I'll take you seriously.

Thanks, Higashi :) it always gives me a tonne of confidence to get any (but especially positive) feedback from you as you were someone I wanted to be as good as when I first came to vgba :)