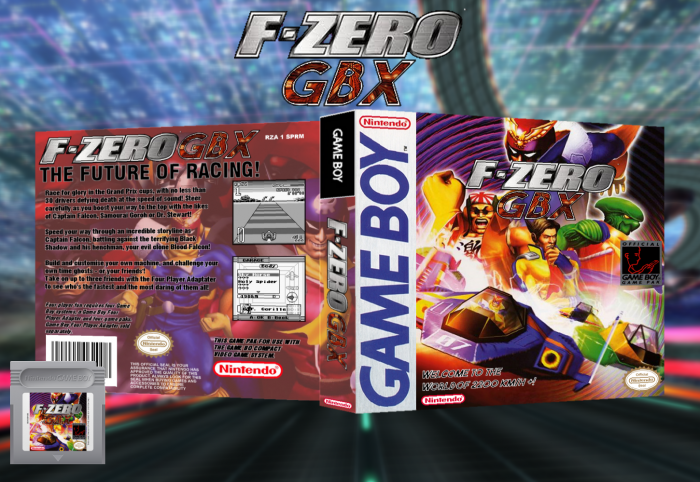 Just an idea that went through my mind the other day : what if F-Zero GX was originally meant to be a Game Boy game?

Well, here's the boxart for it. The text on the back was expanded upon the original GX text, and the screenshot are 50% homemade (only the Blue Falcon is mine on the first pic, the rest of the mockup was made by maarten and Chris2Balls from the VG Resources forum; the second one is all mine)

I also used F1-Race as an inspiration for the 4-Player multiplayer text.
Anyway, it was a fun box to do, hope you'll like it!

pretty solid first effort, though i feel like the logo's placement on the cover doesn't work very well, i'd suggest getting rid of the "welcome to the world..." text and lowering the logo just so it isn't over captain falcon's face

Thanks for the feedback! I did have some trouble with the logo, as I had to choose between Falcon's face or Stewart's head... I didn't want to place it too low as well. I'd like to keep the "Welcome to the world" text as it seemed to be pretty usual for early Game Boy games to have a tag-line in this position.

I'll try to see how it looks with your suggestions though. Thanks again!

Printable has been available from the get-go ;)

Very true to form. I like it. The logo on the front is covering Captain Falcon's face, though.

Could be a port from the GameCube to GB but in that sense would be more realistic if it was for GBA instead of GB since GB was dead at the time the GameCube came out, but it's a nice idea any way.

The front composition is flawless. Great job on that. The back is kind of amateur-ish but you're in the right direction.

Thanks for your comment. Yeah, it would have made more sense to make a GBA port (especially since Maximum Velocity came before GX) but I like that good old monochrome gameboy! ^^

What do you find amateur-ish in the back? I personally tried to mimick the old Nintendo boxes (like Super Mario Land) with text on the left and two screenshot on the right.

Aye not to shabby