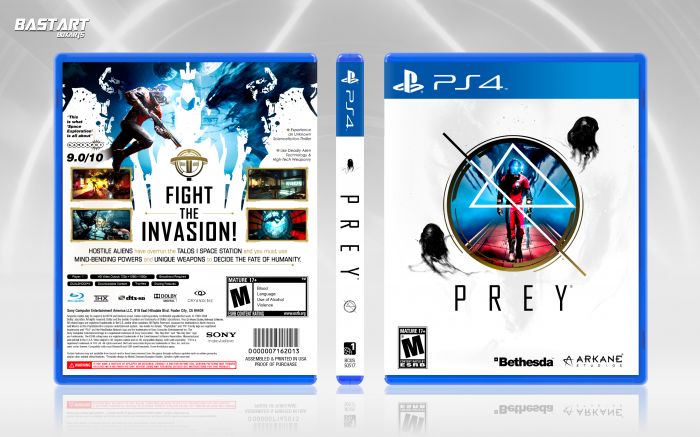 Making a comeback....nah not really, but I've made this as kind of a tribute for the release of Arkane Studios version of Prey.

I never even played the original, but I've heard it was a good game on the previous generation. I hope this new take on Prey, lives up to my expectations (from what I've played in the beginning hour demo, which I thought was a great teaser of what to expect in the final version - great controls, disturbing atmosphere, futuristic art style, mysterious enemies and story line)

Nice. I like the subtly you have going on in the background of the white. It adds a nice little contrast. Clean work as always, though not as detailed as your other stuff. Granted, not much is known about the game yet if I'm not mistaken? Anyway, great work.

Thank you. Yeah, the embargo on the reviews, left the details pretty much in the dark (which is fine by me, it fits the game, I guess? lol)

Wow, very nice. I like way the art is split up on the back.

Pass me the lighter.

@Bastart Youll just never be at his level, i never see wacky filters on your boxes bastart step it up!

@AB501UT3 Z3R0 Yes you are right he will never be on my level he always was and will be ten levels below me...

really nice bro but , tagline in back not good ,very big , change color or use style . otherwise nice ;)

If I make the tagline smaller, it creates too much blank space around it (I mean it fits, why change it?) The gold/black gradient on the tagline, is there to follow the Prey graphic logo on the front (I think it looks a bit dull in ordinary black)

@shiraziha no big deal, I just explained why I made those decisions.

Really like the box the backs come out great, and if you ever get an opportunity id give the original prey a go its worth a playthrough

Thanks. I've checked and it didn't came out on PS3 back in the day (so this XB360 exclusive, unfortunately slipped past me)

Nice seeing a new box from you. I like hi-res quality, not a huge fan of typography or the tagline, but the colors are good looking.

Thanks. I guess the font choice isn't for everyone.

@Bastart The update you made to the text is much better now!

Congrats of the HoF! And I totally missed the update on this, but it looks even better now.

How do I get my own version of this? If there's not a printable download, what's the point of making box art?