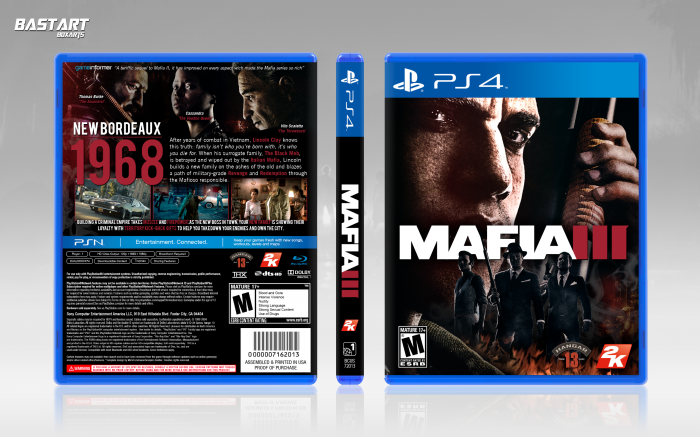 It has been more than half a year since I've uploaded on VGBA, but I had a title I've been interested in for a while now and decided to make a cover for it. I'm not really back at making box arts, but once in a while something might pop up ;)

I know the quality of the images are a bit low (150 dpi) but I quite liked the grainy, washed out look from the artwork of this poster link and decided to go for it and make a box out of the artwork.

I'm really looking forward to this game. I've played Mafia II a lot on PS3 and I really liked the deep story and characters, but the side activities (like GTA) were really non-existing :/ I can only hope this third installment, will last a bit longer gameplay-wise ;) than its predecessor.

I've tried to bring the focus on Clay's eyes/head by making it more vivid and making the Italian mob quite darker at the bottom part (the idea is to show the 'Uprise' of the New Mob and the 'Downfall' on part of the Italian Mob) that's why the cover is quite dark overall.

b.t.w. I liked your song from the forum ;) sounds dope.

This is really nice and clean, even with the bit of grain (it seems intentional for the most part)—but to expected out of you. I hope you do post a bit more often. You never disappoint me.

Thanks and yeah, it was part of the style of the artwork. I just hope I'll get inspiration more often from the art style or just personal interest in the story/gameplay part of a game, to get me going and trigger myself to start and finish a box art.

you and countzero are the best covers designers i already see! congratulations and please, includes printable in your covers! i'm aprecciate very much your work! sorry my bad english, i'm brazillian kkkkk congratulations for all this beautiful covers

Thanks, but I don't consider myself on the same level with some of the designers on here (I mean, there are definitely better skilled artist out there)

Very nice! That poster you linked is badass also.

I'm like you hoping that this game is good. Played the first two and thought that they were not fully executed. Let's hope this game will be different (positively).

Yeah, I really hope the game turns out great and it expands on the gameplay/free roam elements of the Mafia series.

Bastart, you make very cool box'es arts and i want to buy few arts. I need to create arts for: outlast, zombie, tricky towers, furi and other psn games. I can pay. Lets write me on my email: [email protected]

Thank you, but I don't really do requests for box arts (it's just a hobby, that's all) I'm afraid you have to look for someone else :/

@Bastart your stile. Its really what i need. Other guys havent this sweet moments/

@Bastart lets write me on my email i can tell you about my idea. I dont need great work, but i love your style of arts.

Nice box! I think The back is a bit overfilled with content but overall it's very nice.