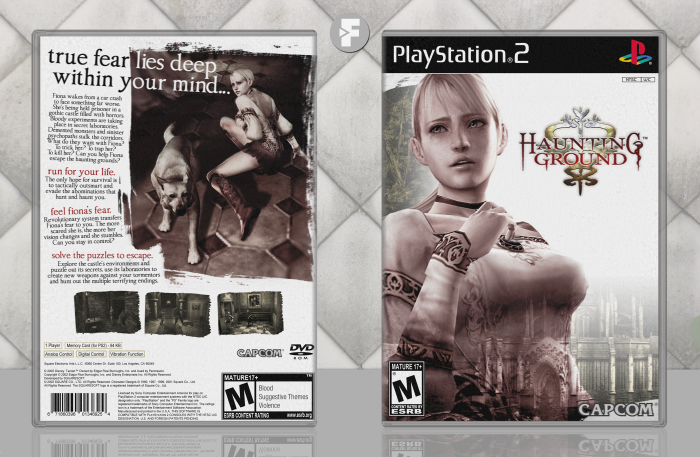 So, Haunting Ground is a survival horror for the PS2 that is somewhat of a spiritual successor to the Clock Tower series; it's a really interesting game with a really cool gothic inspired artstyle and setting, but it definitely has seemed to go unnoticed, so that's why I picked it for the Hidden Jewel comp. I'm on the Yellow Group, since the protagonist of this game is female, as you can probably guess by the front of this box which has, indeed, a female in it.

Anyways, as always, constructive criticism is welcome, and huge thanks to Matknapers18, Martiniiiiiiiiiiiiiiiiiii, Higashi89, Brettska99, lucidhalos and Paper for their help and feedback on the forums. Also, credits to Titan38 for the ESRB's used, Cerium for the Capcom logo and beardedwalrus for the PS2 template.

Don't you need a tag if you're part of Hidden Jewel?
Anyway the box looks fantastic, quite atmospheric.

Almost forgot about it! Thanks, Sara! :D

The cover itself looks great, I especially like how you've handled the tagline, synopsis and screenshots on the back (I only think the brush effect could also appear somewhere on the front)

I personally preferred the official black PS2 plastic case around the cover, it makes it a tad more official to me.

Thanks, Bastart! I'll look into adding the plastic soon enough. Any ideas on where could I add some brushes on the front?

@FrankBedbroken Okay, that sounds good. I'd say add some light brush effects in the top left corner on the trees and in the bottom right on the cathedral.

It's updated! Added a plastic template (credit to Indexenos) and adding some brushes to the front, to make it somewhat more related. What do you guys think?

Great update, this box deserves to be in the HoF for sure.

Came out just as beautifully as I thought it would, nice work!

Beside everything great on this one, I'm not really a fan of tagline font , sorry bro , but the box is great , :")

Thanks, Ali! Personal preference on the font, I just thought it fit the theme well. :D

Congrats Franco, this is well deserved! :)

I am not complete.