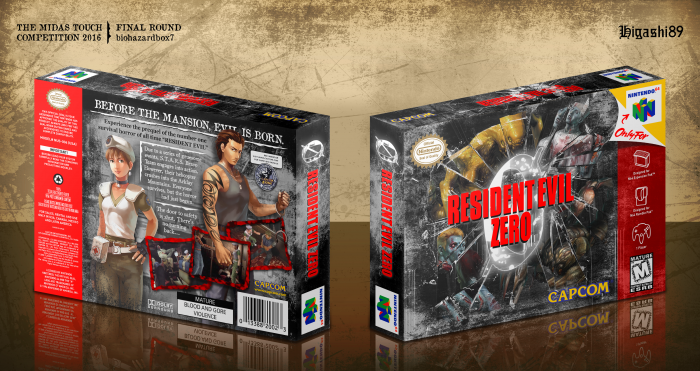 The 4th round of Midas Touch 2016. My rival this time around is Martiniii332, one of the best designers on this site. Cheers!

The box we had to remake (link) is basically a "what if" box art for the cancelled N64 version of Resident Evil Zero. Because of the 64's hardware limitations and the GameCube was going to be released soon, they decided to recreate RE Zero from scratch for the GameCube. Then years wnet by and they released a HD version for the update consoles.

I forgot to make a cartridge for this, since the original had one, but I hope I don't lose any points for this, rofl!
Well enjoy. It was hard to make, especially the broken glass effect which I don't even know if I did it right, but it looks cool to me as it is.

LOVE IT! Though I think the skewing is off and is kind of distracting, but minor detail!

Looks really great. The skewing looks a little off, as Alliance said, and it also seems a little unnecessary to have such a sharp angle. If you skewed it on a smaller angle then I think it would look better.

this is awesome yo, good luck in the comp!

This is such an upgrade, both by design and presentation. Good job, Higashi and best of luck to you. :)

I love this box. Skewing is off but arrangement and collarbone is dead on. FAV.

I don't think there's any way I'm submitting, but I wanna say you would've won anyway, this is too fire. Congrats.

I think this would be 100% what the real box would have looked like. Love it!

I just want to play this version after seeing this!