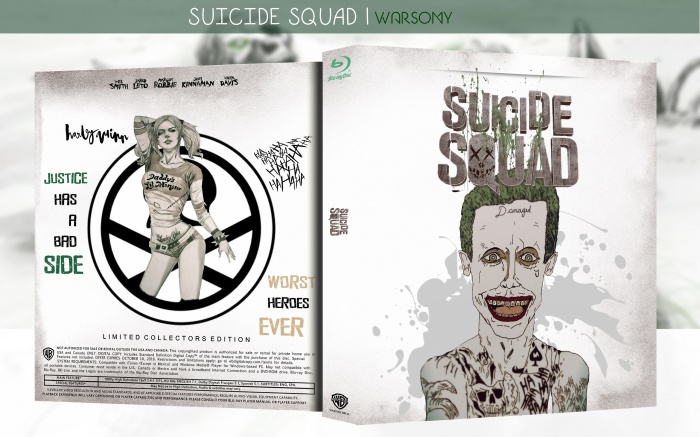 Well after a long time of absence from the site, I decided on my own return to the portal. I commented that I really wanted to make related to the incredible world of superheroes and villains design and make the greatest honor Suicide Squad box. This spectacular film to be released, really loved the trailer and the presence of Jared in the movie will be interesting. Extravagant design combining different colors with a black and shaded background.
The drawing of The Joker I realize it basing on the same aspect of Jared, I gave him a sinister and crazy touch. Everything else is an official but obviously wanted to emphasize what the drawing. I accept any recommendation, any advice you say I will take into account. Greetings!

I like it. I always appreciate work that has something a little more personally involved. Good job.

I for one, can appreciate the effort put in the custom art here. I personally think it looks nice. Although, I would suggest editing the logo on the front to make it a bit fitting with the art itself, since it feels like it clashes with the rest at the moment. I also would suggest having the credits at the top of the back on the top part of the front. But other than that, solid stuff. Good job, man! :)

@FrankBedbroken Thanks Frank! to appreciate my effort and the tips you gave me. ;)

The joker on the front as well is really great, only think I would say is his head/should are out of proportion to one another, I would ether make this head smaller or make his shoulders bigger. But that's just a small thing. Great work man!

You're right, thanks man! I'm glad you like my design ;)

@Warsony It's all good man, keep up the great work!

Anything with some custom drawn art deserves a fav. Well done man, welcome back, it's been a while. Hopefully you will start doing more again :)

Thanks, Vincent! it was time to return. I'm glad you like my art ^^

@Warsony always have, will you be making a come back?

@Warsony I will keep an eye out for your new cases

logo on the front is inappropriate. rear looks very bad

when ever you make a good design, come and comment. ;)

The front drawing of the Joker does remind me a bit of Beavis & Butthead in some sort of way (no offence, I can really appreciate the effort) The Harley drawing on the back is impressive though, nice job.

I was not offended on the contrary! I love this series and I agree with you bears a resemblance to them in form, details, facial features and also the atmosphere. Thanks and I'm very glad you liked!