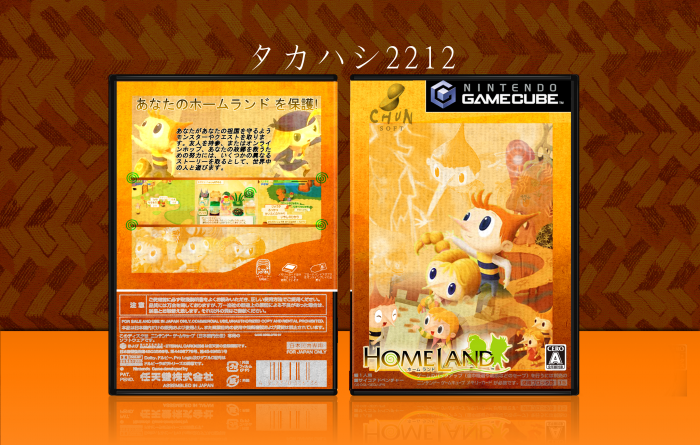 Homeland is a Japan-only turn-based RPG released for the Gamecube in 2005. The game is most notable for being one of the five games to feature online play on the Gamecube, and being the only one that wasn't a Phantasy Star Online game. More notable, is that way in which the online worked, where instead of connecting to a server, the host Gamecube would actually become the server for other players to connect to. It's assumed the game wasn't released stateside due to the lack of popularity regarding online games on the Gamecube, and how late into the Gamecube's lifespan the game was released.
The game has a decent following, with fans still playing online. There is a fan translation project (called "The Homeland Project") to translate the game into English.
Funny enough, the game's official website is still up, so if you wanna read it, go for it.
Credits:
Images - Giantbomb
Textures - Google Images
Template - Myself/qwerty334
Help - Lucid, Sarshi, Mart, Franco, and Alex

Your logo is cutting the text right at the bottom of the front and it's kinda awkwardly placed. The shaping on that bottom box on the back (not on the template) above the icons is a bit jagged and blurry, but overall I like it quite a bit. Good job.

I'll see if I can go about fixing the problems you stated.

Thanks, Mart. You were a really big help on this!

I too am a fan of the Japanese.

Awesome work, I love the bright colour scheme and the texture is really nice too. Well done man

i wasn't even aware the gamecube was capable of online play huh that's cool, as for the box i dig it alot i like the warn out canvas look super nice colours, good stuff samson!

Yeah, the GC wasn't exactly known for online play, that's why the only games besides this one are the Phantasy Star Online games. All the games still have servers running so you can still play online.

IMO, the best part about all of this is the keyboard controller they released (literally a keyboard with the two halves of a GC controller slapped on both sides).