Xbox » Stubbs The Zombie In Rebel Without A Pulse Box Cover ← → 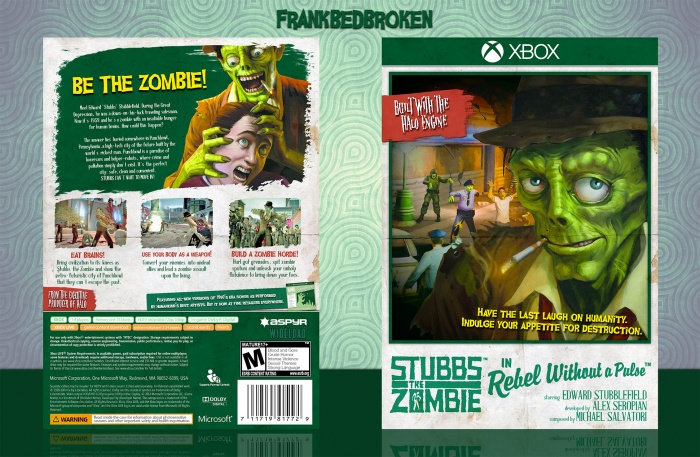 Woah! Two boxes in one week, that's odd! Anyways, here's my box for the first round of Octoberfest, and for a game that I wanted to tackle for a while now, for a console that I wanted to make a box for a while as well: Stubbs the Zombie for the Xbox. It's a really quirky and fun game, which, as you might guess, puts you in the role of a zombie in which you have to form a zombie army, spook the civilians, and do all of the zombie cliches that you normally associate with zombie movies. I think this is a perfect fit for this first round, so I went ahead and tried to make something for this.

As always, constructive criticism is welcome and huge thanks to TheTombRaider, Paper and Bastart for their help and feedback on the forums, it's greatly appreciated. Also, credit to Gamescanner.org for his logo, and EdwardPines for the legal text, from his template.

Stubbs The Zombie In Rebel Without A Pulse Box Cover Comments

Comment on FrankBedbroken's Stubbs The Zombie In Rebel Without A Pulse Box Art / Cover.

Liking that title and the box looks great ;) It has a strange kinda feeling to it (in a good way that is)

Thanks, Bastart! The game has that kinda strange looking style to it, so I'm glad I managed to pull it off. :)

@FrankBedbroken the front page seems to have hiccups again, it works fine in full view though :/

@Bastart Yeah, there isn't really anything I can do about it at the moment. It'll fix itself in a few minutes, I guess.

Makes me want a Xbox One.

Now this is flawless!

also don't buy an xbox one

microsoft is taking the money and running

Love it. The front cover looks pretty damn official. You did an amazing job, as usual! :)

it is a masterpiece)

I'm a bit torn about saying "horror" for this, personally I think this is due to the white colouring and the cartoony style, imo this makes it seem a lot more comedic than spooky/horror. Dont get me wrong, as everyone has already said this is amazing and I do love it too. But maybe having black would make it seem more spooky. Regardless of how I feel about the colours it definitely has a old school vibe to it and it's a fantastic bit of work. Well done Frank

Thanks, Vince! The thing is. that's the point of this game, it mostly uses some of the classical horror tropes to a comedic extent to play them off in a new, interesting way, so I used fairly bright colors to give that feel. :D

@FrankBedbroken Then you captured, the feel of the game perfectly. Im probably overthinking it, but I thought a darker colour and feel to the design may fit the comp better, not that it overly matters, because like I said. It does have the old school horror vibe to it, but just a very happy horror :)

Oh dude this is fantastic, very good comic like take on the challange, came out awesomely!

Wow very nice work my friend
This is very nice and again you make leatring box
Good job keep it up. ,)

also i still don't know what does leatring mean

Yay, HoF! Huge thanks everybody for the likes and the comments! :D