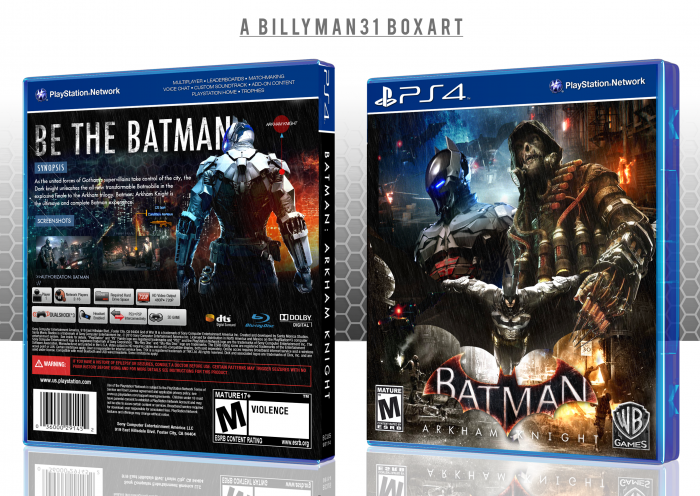 Second box in under a week!!
Been playing a hell of a lot of this game recently but wanted to take a break to honour it with a boxart. I wanted to focus more on the villains in the game instead of Batman and show hoe the Arkham Knight and Scarecrow have taken over.
Credits go to -
tomB for template
mark ion for logo
ulquiorra, b.serious, shirazihaa and amia for renders.

This is pretty amazing! I love the game as well and I find no fault with the box. Great job!

I quite like most this. I think either just get rid of Batman to make it seem more like scarecrow and arkham knight have taken over or use a different render of Batman that's more of a close up but still less dominant the villains. Personally think the flying Batman render looks quite odd with the massive renders behind.

Thank you. On the front I was going for a sort of college feel, similar to the original star wars poster such as link but I think I should have added more characters to do that.

It tastes fresh for a batman design , all those colors I mean ,
but as Vincent said about that render in front , I'm not agree about changing it cuz you cant find anything to replace it , but U can work on it , when I see the big size , left side of his cape is missing if I'm not mistaken , Or U can change the Knight's render with some other render of his ,
beside all these it's great box, really love it , :")

Thank you, I've just added a printable that can be downloaded and printed, it's the first i've done so hope it's the right size

You Did Great Job. well done

1 question; where did you get the PS4 box render?