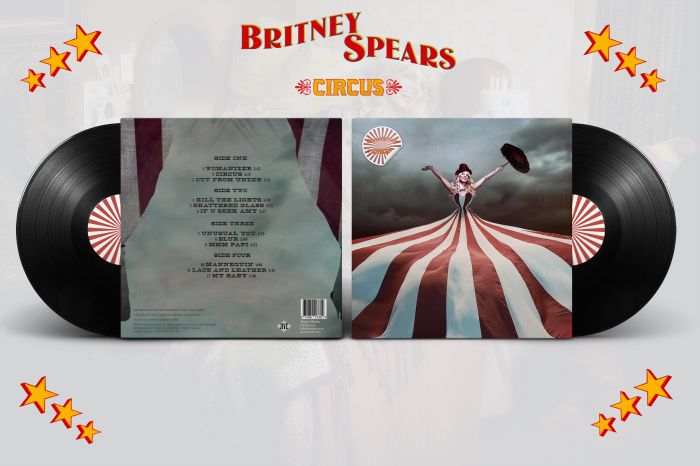 This happens to be my first public upload of any art I've crafted which is being terrifying but also somewhat nice to do. This piece is inspired by the 'Freakshow' season of 'American Horror Story' and also the dark theme of Britney's life (rather than the album's uplifting (-ish) theme). I prefer to see the darkness of an album rather than the lightness, but the other will probably happen with future pieces I'll upload.

That being said - this is an entry for Martin's 'do u evn music' competition, which has some very talented VG creators who I am happy to say I am competing against. I wish everybody apart of the comp the very best of luck of course.

This is the original image of Britney Spears which was used: link

Special thanks to spypilot, Paper and SilentMan101 for their comments in the WIP thread. I'm very appreciative for that.

This is really sick, welcome to the site man, also good luck in the comp!

Thank you, thank you & thank you! Your boxes are truthfully incredible and I'm sure to be inspired by you.

Great first box, dude! I really like the aesthetic you went for. Great job, and welcome to the site! :D

Thank you so much. Good luck in the competition of course.

Woah... For a first box this is incredible.

Damn with a front that sick, i'm bummed that the back is so lame.

I somewhat agree but I'm actually a fan of covers which are incredible and back covers being pretty basic. I've been slowly constructing ideas for a back but it's hard to work the tracklist into it.

The front cover has been updated to include cleavage considering it looked unnatural just having a pasted flesh tone covering the torso, which was there because I removed Britney's original dress and had no idea how to go about making it look 'natural' as possible - which failed.

I'll possibly begin creating a fresh new back cover but I doubt it'll match up to the front.

I LOVE THIS CONCEPT

Thank you so much!

I'm glad to hear, thanks!

Love that front man well done, I feel the back could have had a splash of colour in it. Maybe taken from the red stripes. But apart from that the design itself is very nice! Good luck in the comp and welcome to VG

I had the idea to do exactly that. Possibly having the curtain from the bottom of her dress/tent being beside the track list and having the track list be in the 'entrance' - if that makes any sense? Either way, I'll go through with that considering the few complaints about the back being pretty bland. Thanks though!

@Phunk Yea I know what you mean, I actually think thats a really good idea. You should try it.

Awesome job dude, I actually kinda like the simplicity of the back. Welcome to the site!

Thank you! I liked it too and hopefully kept the simplicity with the update.

It appears that the update button hates me and updates hours later.

Anyway - I updated the back slightly. I kept the simplicity but added a little bit of color to match with the rest of the piece. That'll be my final update, hopefully.

Very nice dude
keep it up

Looks boring to me.

I wasn't expecting to come on here and find this entering the HoF. Thank you so much everybody!