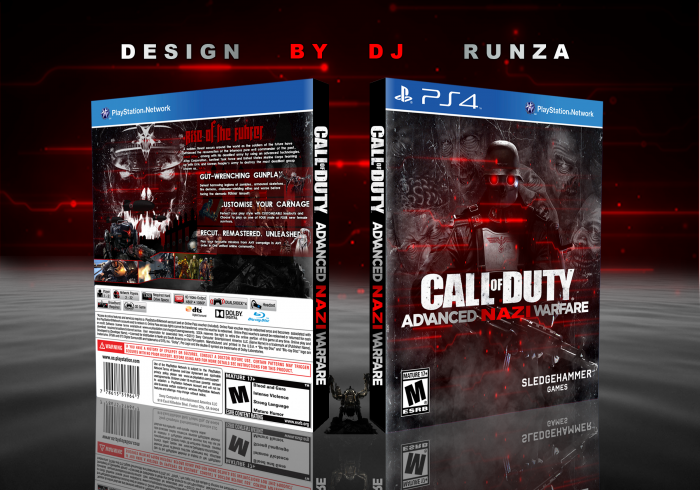 Hello everyone, today, I would like to show every each one of you about my latest cover box art of 'Call Of Duty: Advanced Nazi Warfare' about a sudden threat appearance of Neo-Nazi zombie and demonic soldiers by using some hi-tech and advanced technologies who seeks revenge on humanity for destroying them during in WW2. As you can see, I decided to go with some hi-tech dark horror theme for the whole cover. I also actually mixing some of the characters from the game Wolfenstein: The New Order, Zombie Army Trilogy and a movie known as Frankenstein's Army as boss battles.

Therefore, I would like to say thank you so much to these professional designers, FrankBedbroken, Sarashi, Paper, AnaRchyxV2x, AgentLampshade and spypilot for the criticisms, suggestions and helping me out to make this cover box art of mine. Hopefully you will like it! :D

Also, there's a mini toy (Mecha Zombie Machine from Wolfenstein: The New Order) in the middle between the cover box art as well. XD

Pretty good! My favourite from you ;)

No way am I a professional man haha, but you're welcome for the suggestions! looks awesome.