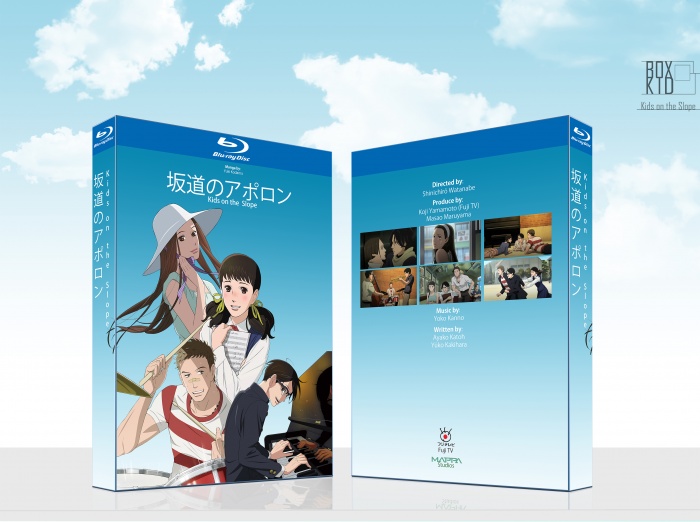 Hello... first of all, by any means I am not a fan of "Anime" if I have seen "Samuray X" when I was a kid, I think that would be the only thing as close as a fan of a Anime series I would have come to experience.The funny thing actually was that I had such a huge boredom one day, and I was traveling trough YT and I stumble by a video someone did called "top 10 anime's" And I was saying to my self as I was clicking the video "I have to be that crazy" anyways, the point is this series called "sakamichi no apollon" (Kids on the slope) called my attention from the second I lay eyes on it.

I even din't watch the whole trailer and oh boy what a surprise. Everything about this series is "Beautiful" from the story,character development and the most beautiful thing It got my eyes on it the whole thing was the story, the love affection between friends and how the love start becoming a fun/sad/compelling factor and how those affects the whole drama.I am happy I stumble on this.So

Comment on BoxKid's Kids on the Slope Box Art / Cover.

Bit plain, wouldn't you say?
It's nothing special, I look at it and just think 'meh.'
That's exactly how I felt about your The Way Way Back cover.

Sorry if I sound harsh, but I'm being honest.

I know what you mean. Don't worry I don't feel bad on those "harsh critics",(I like all kinds of critics) believe me when I say...

...that I though of those points of views, and the way I wanted to do this box in particular. The fact that I took this approach, is because it fits perfectly with the subtle artistic presentation of the concept itself (meaning the series) like with the movie box of "The Way Way Back"

@TheTombRaider No ! I think this is very nice

The front isn't that bad. However I agree with Nathan and Jakob the back looks a bit plain and boring...