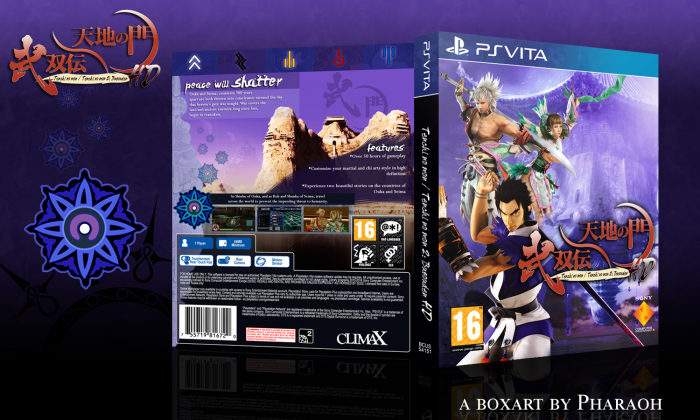 I have been dying to do this box for some time now. The game Tenchi no Mon (Japanese) is a PSP game that was known across the world in international releases as Kingdom of Paradise and as Key of Heaven. It is a fantastic game and it made the PSP worth more. It is one of my favourite games today and is up there with some Final Fantasies. That good.

There was a sequel for it but it was only ever released inside Japan. This is a shame because it looks like its amazing and it looks like it would be a great story. i would have loved to delve into this world more.

My longing so great, I decided to make an HD release for the Vita. Seeing as the PS Vita is a mini PS3 of sorts, It can handle that and will look more CG I guess.

The Intricate patterns you see in the Template header and on the left hand side of the box are scans from the manual/artbook of the second game that I own myself. The symbols on the top of the back of the box are the clan symbols from the first game and are very Key, so I needed them to be there. The flower is also the symbol of the kindom in the second game. The flower took me forever to render. It was actually supposed to contain more, but I got tired of it. The rest of the images were all rendered by me and are Sony official images for the games.

I am aware that the two characters in the background are "floating", but the material for this game that is hi-res or anything-res is so scarce to the point that, the fact I had those guys there in the first place is a miracle. Unfortunately, they cannot be bigger than they currently are, because they would immediately pixelate. Um, I think that's it. Overall this box is maybe 40% different from my original vision, but I love it. I didn't expect it to be this vibrant.

The backgrounds went through a million filtering and blending modes for the box to arrive here.

I also customized the PSVita template with the pattern scans because I was having fun with this box at the time.
I do think that the back is a little empty, but I am not sure what to do about that. I don't want to put useless information there, and there isn't enough source material out there for me to use.

EDIT: I decided to fill the back of the box a little more, because I should try my hardest to put EVERYTHING into this. So I put in some of the kanji of the game's logos and one of the scenery scans i managed to salvage from the second game's box. Not to mention it contains the two moons of the world, so I am happy. I doubt I will be updating this box after this. I think that after this edit, i have put in everything i have scanned. I don't think there is another image that i could usel Except for 2D anime ones.

Many thanks to TheTombRaider, and Aldimon for the help in the forums. This box would not look at all like this right now without you guys.

Nice job, mate; I really like the subtle colors it has.

Thanks a bunch Frank.

It really is all thanks to you. When I was like: "maybe make it vibrant" you were like..."um duh" and so i went for it. It would just be dull in colour otherwise. Cheers again.

@Pharaoh
Haha, no problem, glad I could help :)

Thank you man. I've reached that stage where I notice every tiny little flaw and it is driving me nuts.