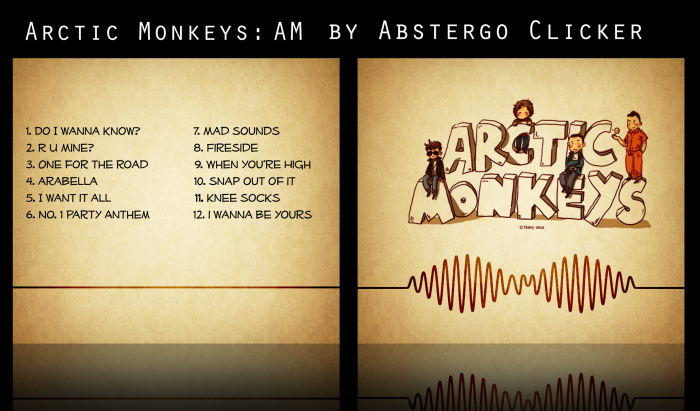 I originally didn't plan on uploading this because it's heavily inspired by FrankBedBroken's Scott Pilgrim soundtrack cover, but I like to receive criticism so I can learn how to better my work, so here is my cover for the Arctic Monkeys album AM. What do you think?

And unfortunately, I was unable to find a source for the illustration beyond it originating on Tumblr, so I left the copyright on there.

Thank you. It's what I went for, so I'm glad it shows.

I really like this. The whole composition of the box is actually pretty neat. Good job. :)

well, to be fair, the Scott Pilgrim cover was pretty damn perfect.

@FrankBedbroken Thanks! and @Aldimon couldn't be more spot on. It was the perfect cover for that soundtrack, and put together extremely well.

This is really nice. Well done

This is great , I love your idea in front and back k good for A music cover , keep up your work bro