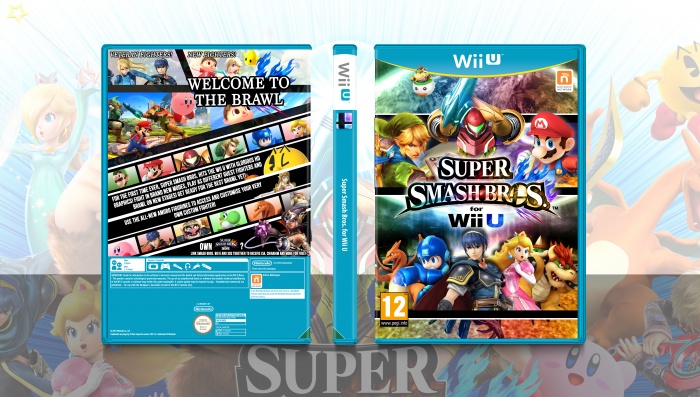 Whew! It's finally finished!
So this is my new Smash Bros. Wii U box
I'm still not entirely happy with it, so please leave any feedback and I plan to update it. I think my concern is the front; I think I may have done it too dark...
I decided to add my own touches to it; I've used Zelda and Sheik's appearances from Hyrule Warriors instead of Smash Bros. because I prefer them, and also included a promotion that gives the player bonus characters, including Cia, Ridley and Ghirahim.
Most renders, are from mariowiki.com and zeldawiki.org, except from some that are custom
So yeah, leave your feedback if you have any :)

UPDATE
Updated the box. Still have the black lines as I'm unsure what I should do, so leave any feedback as I'd find it very useful and I'll update again.
Presentation still requires an update, I'll include that in my next update for this box

Thanks Vince, I wasn't sure if I liked it at first, but it seems like people seem to be receiving it well :)

The use of Samus as the focal point on the front interests me beyond belief, and I love it!
I would say it is a little dark throughout due to the black bars, and especially on the front when added with the logo's dark outline. Maybe thinner bars will help? I'm not sure, but some tinkering should do the trick.
The back also just seems like there is a lot going on, especially when compared to the front, and maybe too much is being cramped in the small area. I'm also not the biggest fan of how the text is presented in the bottom left.
All in all, I like this, and I love the front's layout. Some work to be done, but this is gorgeous really.

Thanks, yeah I agree with what you're saying. I thought the same things

The black bars are too big in my opinion, they distract from the rest of your box. Altogether, this is still neatly designed, I'm not too fond of the way you handled the text on the back though. ;)

in spite of i dont like this type of games but your cover is good, front and back is good but i think there isn't any structure there and the border around your text on the back can have a different color for a better view of the texts , but i completely like your box, it's good . . .

Agree about the black bars, which was previously mentioned. Also, The front is very nice (when in standard view; quality is compromised in full), but the fact Samus is the focal point is interesting... not sure how I feel about it. Good overall.

Also, I'm sorry, but the presentation turns me off a little; dimensionally, it makes no sense.

Thanks for you're feedback, yeah I'm not the best at presentation

Agree with aldimon and Martiniii332 about the black bars. Though for me, that texture seems weird too. It sticks out in a bad way, considering how well structured your box is.

Also feel like the text on the back could be better treated in the synopsis. The size is far too large and that red glow is out of place. Besides the mentioned, I like the way things are laid out and feel like your front is much stronger than your back. It would do good to do those tweaks and you'll indefinitely have a very strong piece.

Thank you all!
I definitely agree with what you're all saying, some areas are too dark and the black bars do have size issues. I'll work be working on an update soon :)

It's Really Better After Updating Nathan,Keep It Up . . .

Nice update. The heavy use of black is still irritating me somehow, doesn't fit the game IMO.

Same with me, I just can't think what I can replace it with. Still, I'm planning on doing one final update, and I'll fix it then.

Update is looking good homie. I agree with aldimon about the lines but we both can't really come up with a replacement so we're at a stalemate. If you ever have an idea, though, go for it.

I like the update as well. The solid black looks much better. It's very heavy though, which is not surprising considering how many areas are treated in that way on the back.

I'd try to tone down the black over the screenshots in the back and then take the shade it creates and change the color of the bottom piece where "own super smash bros 3ds?" is to the same color, so there is less heaviness in the piece.

Not sure how this will look once done, since I'm seeing this in my imagination.

Nice Update...Like You Again !!...Welldone... Great Work Nathan
Fine Lines
The pictures were so beautiful
Only if the text in back ( Middle cover ) does not change....Better...
Anyway....This is Professional Work...Keep Up Your Work Nathan You Gettimg Better....

Thanks guys so much :)

Now sir, now we are talking!

That's very good, you missed a Nintendo logo on the front.