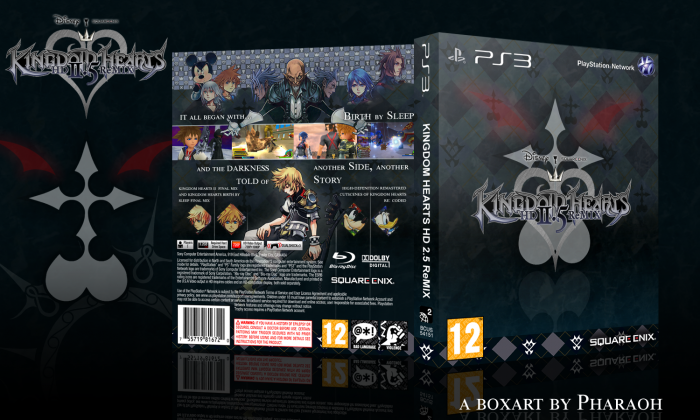 Here is my 2.5 contribution. I have wanted to get this out for some time, but this particular box has been rather difficult because of the style i have been trying to follow. The later generation of Kingdom Hearts is darker and more complicated than the first, hence the darker colours and more text and characters on the back. I wanted to have another sleeping character on the back as I did with my 1.5 box, so I put Ventus there as he is a major focus in the 2.5 games. Unfortunately, he is missing from the top banner because of this, but I didn't want to repeat him on the box. Sora is repeated cuz they are technically two different stories. I had to move Ven much lower than I had Sora simply for organization purposes and what was best.

On the front as with my 1.5 box, I have the Nobody symbol there to represent the main game of this release, Kingdom Hearts II and behind it, I have the Unversed eyes in place of where I had the petals on this box's predecessor. It's not as pretty as the other one, but I am hoping the darkness is felt from looking at it. the background was made from scratch by me and contains the symbols for both Nobody and Unversed to show off the main games even though I am ignoring coded in this design aspect. I wanted to make more of the Unversed prevalent in the front design, but I found it hard to bring to life so I put it away.

I rendered everything except for Ventus on the center in the back, who was rendered by Uxian. Template is mine, though i got the legal info from another template which I can't remember.

Hope you all enjoy. I also plan to be cheeky and make a KH Dream Drop Distance HD ReMIX for the PS Vita since I have one, and the Vita has amazing capabilities for it. Especially it's HD ability. I might call it KH 2.75 HD ReMix or something. Although I might come out with a different box before then. Who knows!

That looks awesome. The whole style you went for it's amazing. I watched the progress on the forums, but i didn't comment simply because there wasn't anything i could add on, really. At the moment, you're one of the best boxartists around. Keep going, pal! :)

Thanks alot man, really nice to hear that. I plan to pump out just one more box like this, which will be made up, but i dont care at this point. This one was really hard, but i am happy i managed to work it out.

A lot of black. Too much black for me, but it is done good, so yeah.

I know. I sometimes wonder if it should have been lighter, but i guess it shows the darkness of the unkown (get it?)(jk). But it shows the dark themes of all the stories in here. Thanks alot dude!

Even though I hate Kingdom Hearts, this turned out quite good. There is a little bit too much going on at the back, but it doesn't really take away from the box. Keep it up :)

Come over to the dark side aldimon. We have cookies...

Seriously though, thanks alot. I thought there was alot going on, but alot of boxes that loom great have a serious load going on. And these games are far more complex than the plots of the previous games so I thought I should leave it that way. You wanna hate KH some more? I have one more KH box to do (of course besides III) and I want to make it bang. It's going to take alot now. It's currently in development and just the logo is a pain to render, but it will be worth it.

@Pharaoh yeah, I mean, it looks nice that there's so much going on, it's just a BIT too much for me, because at the first look, there's nothing that REALLY catches my attention when I look at the back, it still looks great though.

I'm looking forward to it. You rock, your last designs have been sweet as sugar.

When I saw "Someone posted a Kingdom Hearts box" in my notification bar, I thought "Oh man, KH covers are so difficult to make, it's not going to look good...", and then I saw it was YOU, and it made me so happy. This is Simple and Clean, just the way KH covers should be.

1. Your comment made me squeal with joy. Thanks so much.
2. Ha! Simple and Clean. Only a KH fan would get that pun.
3. Thanks again for the praise. I have one more trick up my sleeve for the HD ReMIXes. Have a look at my WIP here. I think you'll like the idea:

Can't wait to see more! I don't have a Vita, but I really hope KH3D makes it to the PS3 or PS4 eventually. Watching the playthrough on Youtube to get a better grasp on the scenario just doesn't feel the same than playing it for real.

Not much wrong with this, other than the fading of the renders on the back is a bit odd. Great work!

I love me some KH