[ Buy The Unfinish... at Amazon 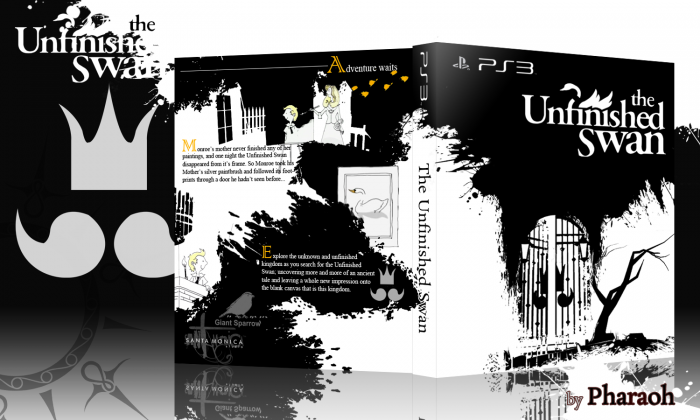 It's been a long time since my first box. I thought it was time i came back to doing this sort of thing. I recently just finished playing this game, and I thought I would try and recreate this game and it's feeling in a boxart as much and as simplistically as possible. In order to do this I vectored and cut out the logo so i could get a good quality version of it, which is why it might not look exactly like the original when it comes to some curves there. The same thing goes for the crown and moustache on the back of the box. I still wanted to emulate the storybook page elements in the game from my original idea which is what led me to have the golden major letters, but other than that it was good work for me. So far this was a lot of fun, and i had loads of help in the WIP forums and would like to thank those who helped me along the way. Hope you enjoy it!

I like black and white style and of course some yellow color matched well. Totally nice work.

Awesome, love the style to this

Thanks alot guys. It was an interesting journey making this one. And once again, thanks for the support.

You really caught the game's atmosphere and visuals quite well.

Thanks alot. I sometimes think that i should have styled the logo the way i did in the presentation because that is unfinished, but whatever. Loads of thanks again everyone.

Imagine my surprise to wake up this morning and see this! i literally said "Woah" out loud! Thank you soo much everyone.

This looks great! No printable though? :-)