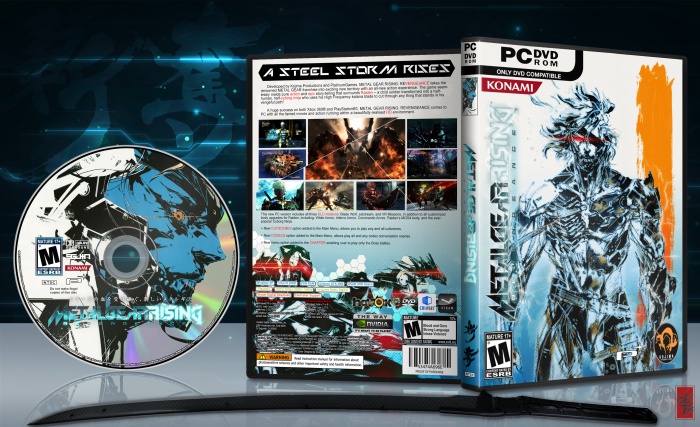 Wow, it sure has been a while since I last submitted a box here.

For this project I wanted to make a game cover for the newly released Metal Gear Rising on PC (since the game is only available as a digital download). For the cover, I wanted to mimic the cover art of the classic Metal Gear games that featured Yoji Shinkawaâ€™s artwork as the focal point.

For the front cover, I used Raidenâ€™s concept art and incorporated design elements from the official Metal Gear Solid 3 box arts. (halftone dots, watercolor and contrasting colors). I also took some inspiration from the Final Fantasy XII Logo for the paint streak.

View full size for details. Printable soon after I fix all the small mistakes.

Sorry about that, I got preoccupied with other assignments.

Printable is now up.

Hmm, for some reason the printable seems to have gained some extra saturation after I uploaded it.
I'm not sure how to fix that, but I recommend desaturating the image a touch before printing.

IF YOUR ART IS NOW COMPLETE. IS VERY NICE TIME YOU SEE AS DEDICATED AND YOU CAN HAVE IT EVEN BETTER IN SHOCK. LIKE to share it. ART MUST BE FREE AND I thanks you to contribute BEST OF YOU. SO YOU STILL