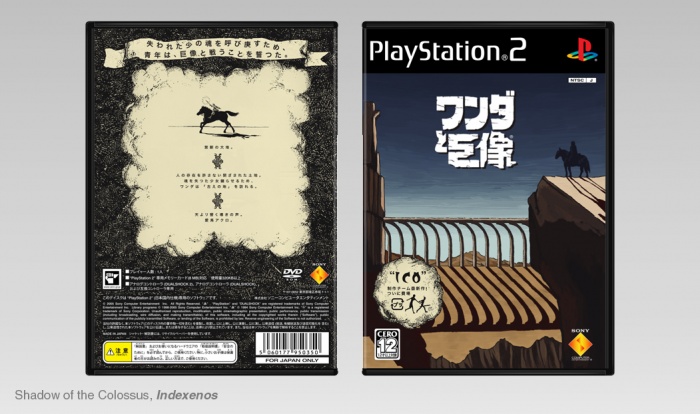 I love the style of the european and japanese ICO cover link and I have always wanted to see a Shadow of the Colossus in that style.
I think most of yoy know ICO and SOTC creator Fumito Ueda was clearly inspired by italian painter Giorgio de Chirico link .
When I saw the cover of the bonus disc from japanese SOTC special edition link I decided to make a SOTC cover myself: that piece of art is amazing.
Since I could not find a good quality artwork, I made the art form scratch. The artwork on the back id based-off some official concpt art. Everything was made by me (in Photoshop), except the plastic template: credit to Qwerty334 for it.
As usual no screenshots, I think they just don't fit the theme of this cover. Hope you like it!

Comment on Indexenos's Shadow of the Colossus Box Art / Cover.

I faved this a couple of days ago, but I just took the time to read the description and realized you drew this on your own! Damn, that's incredible! Fantastic work!

everything from the presentation to the actual size of the image itself reminds me of the good ol days, great feeling

Thank you I really appreciate it!!

It's about goddamn time, this is majestic.

Thanks for supporting SOTC! :)

Still don't get how it took almost 3 years.

Yeah same here! I did not expect this!

holy fuck, this is awesome. congrats!

Updated with Japanese template and new (even more minimalistic) back!

stunning! where did you find that art for the back?

@Patches Thank you! The background, the scroll and the cloud-like box are from the Japanese NICO DVD booklet. I drew the figure.