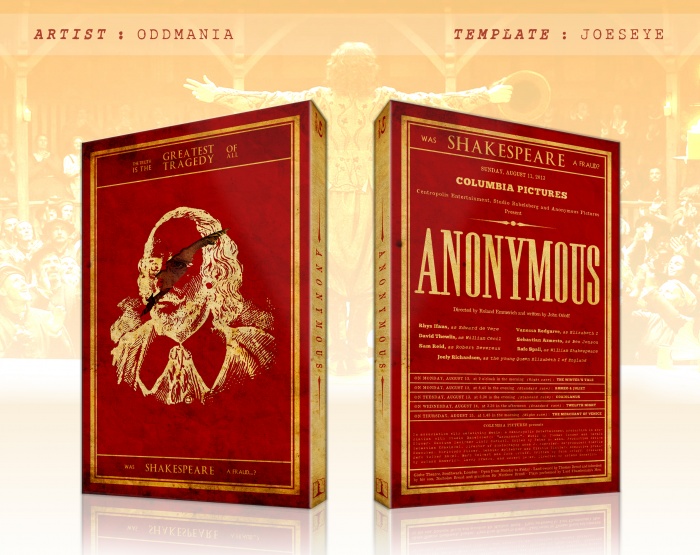 Just a quick note that's important for you to understand the back cover : in the movie, the real person behind all Shakespeare's plays is actually Edward de Vere, portrayed by Rhys Ifans (while William Shakespeare is actually portrayed as a fraud).

So, the face you can see behind that scratch is Rhys Ifans. It's not a photo from the movie (if you could see the entire photo you would see him wearing a dirty yellow tank top and a Jamaican necklace...), but the photo angle matched Shakespeare's portrait perfectly, so I eventually picked it.

Wow, a lot of great boxes lately. Love all the textures, the colors, and the overall style. The only thing i don't like is that ripped face with the non stylized face under it, kinda takes away some style.
But overall, this is just great and highly enjoyable.

Thanks a bunch! I've edited the face, I think it blends better. I really should've done this before.

This is quite some compliment, thanks! =D

This makes me want to read Shakespeare.

Thanks a lot guys, that's very decent of you! :)

@twoxT: Thanks, you sure would be better off reading Shakespeare than watching that movie. Frankly, it was pretty boring. I haven't the foggiest why I've been working on this.

I Love Design . All Design Beautiful ;-)

Thank you guys! =D I didn't expect it anymore!

No description.
Only Can say Fantastic.
More than 10 times I've watched this Page but i Still enjoy