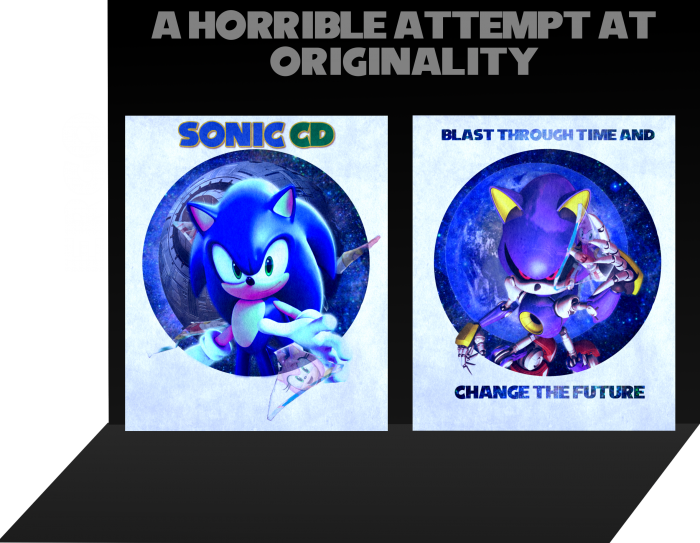 I was working on this during my previous box. It's my most complicated box ever, and here's the history:

It started out as a Mario & Wario box. Then CD. Then a fake game based off of nothing but Sonic. Then Generations 2. Then CD again.

It's also the most complex box I've made with a simple design (the Amys on the glass were tricky to add on.)

Pretty awesome. But that damn text gets to me every time.

"But that damn text gets to me every time."

Is that a good thing or bad thing? :P

@Ergo Bad thing haha. It's kinda annoying when it's so prominent. It could be there, but make it smaller.

*ahem* Nice design but personally, I think it could use more. Minimalism is nice, but this is TOO minimalistic to be thought of as a game case or even a jacket. Nonetheless, I love the touch you did with Amy and the shards of glass. +fav

Addition: Some of the renders also look a little blurry such as the glass shards and images of the Little Planet and the roboticized Little Planet.

The really awkward part is we borrowed almost the same Sonic pose.

Also, it was another side project.

Then again, my top box was "just a pet project".

@Arby Works (second post) - I honestly can't do anything about those (and actually, the regular Little Planet was just an Earth render). All of those pretty much only have one image, and the robo-Lil' Planet was edited off of an already existing image.

@Ergo Almost. I chose the other one because of the intro of Sonic CD where Sonic first spots the chained up Little Planet. Maximum awkward if I had used the other render... ('o_o)

@2nd: I understand. Maybe a little brush-tool to make the outside not seem so choppy. Regardless, lovely concept.

It looks nice, but a little too much blue. Well done.

seriously tho good box you're improving

no it haz 3d ya bish

The most impressive thing in it is the "glass-Amy" thing