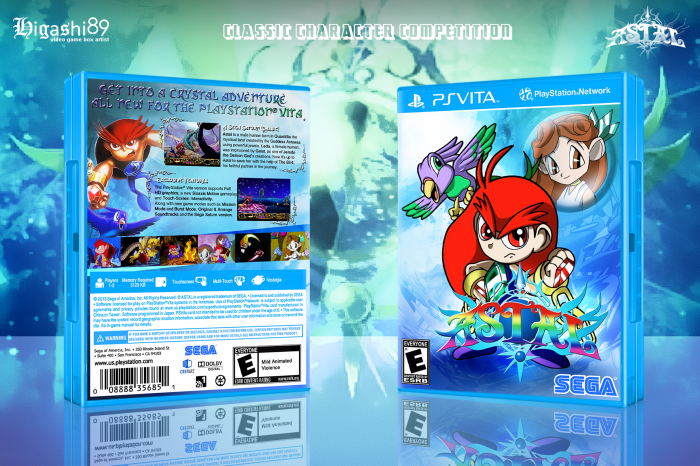 This box was made for the Classic Character Competition organized by Hades. I don't know if that competition is even taken seriously, but I take advantage of it to realize an old "dream" that was making an Astal tribute box art.

Astal, as most people don't know, is a Sega Saturn only game released in late 1995. It's a unique 2D side scrolling because if the environment and the story. Basically, you're Astal, a male human being created by powerful crystal. Leda is the female counterpart and she has the ability to create Life itself, while Astal was created to protect her. An demonic god created an evil counterpart of Astal named Geist and ordered him to kidnap Leda so he can create more of his minions using her ability to create Life. Astal has a partner but it's unnamed, so it's refered as "the bird" in the game, it helps Astal fight enemies and solve puzzles during gameplay. It's a great game, really. If you have a Sega Saturn or a PC that can handle it's emulation you should play.

I originally didn't think that this would come out very well (partially because I didn't initially like the custom front art). Now that I see it, however, it looks amazing.

Other than the fact that the logo is kinda hard to read, I love this. Well done!