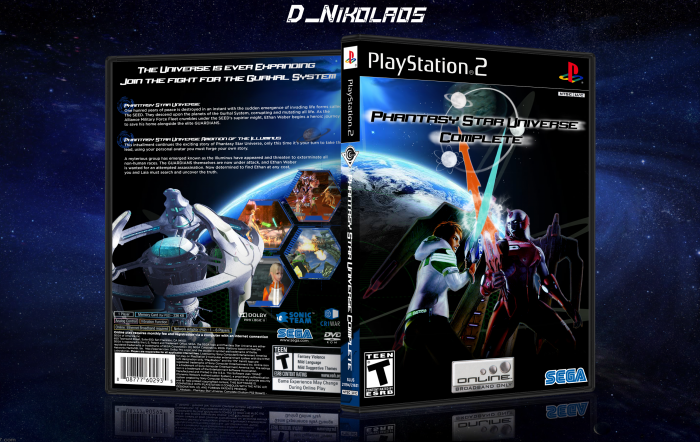 Alright, as most of you might know my first attempts at boxarting were of Phantasy Star Universe, and we all know that they honestly suck in comparison to a lot of boxes here.

This time I really wanted to show some improvement; I wanted to make a completely original Custom Case for PSU/PSU:AoI
And so I steeled myself and got to it, making my own screenshots, rendering everything, typing synopsizes and legal text, as well as making a custom wallpaper to use as the background to the case.

I also decided to make my own logo for this box, and as any Phantasy Star fan can see, it's heavily based on PSO's logo. I decided that trying to recreate the font used in the original PSU's logo would be an increasingly difficult, & almost impossible for me at my current level.

All-in-all I think that this came out rather nicely! XD

Btw major kudos to Throavium and Higashi89, without their help in my WIP thread, I don't think this box would've came out as awesome as it did! XD

Thanks! I'm glad to hear that you like it.

I'm glad I could help. This came out good.

Yeah I'm really glad that you guys helped me out with this too, I don't think it would've gotten near this good without it.

So big effort was made with this cover. Why don't you upload the printable? I saw your printable, it was cool. Your custom logo is nice, and fits well with the game's theme. Overall, it's a good box art.

Nothing extraordinary here, but it's pretty and official-looking, and this is just enough for me to put in my favorites.

Alright I'll post a printable version soon, but just so you know, this box wasn't originally made at the correct size or resolution for printing. I was just lucky that when it printed out it ended up looking great even after I re-sized it to Printable size! XD

And that's what I was going for, I wanted it to look official, because I wanted it for my PSU Collection lol

@D_Nikolaos But you know the PS2 versions does not have online anymore, which sucks =(

@Higashi89
Yeah, I know I was disappointing to find that out, but even more so, after I found out that the Xbox versions still has servers online. Either way if I want to play online I could go onto some Blue Burst Private Servers, or wait until PSO2 comes to the US since it will be mostly free to play. ^-^

@D_Nikolaos I used to play Blue Burst, but them I got sick and started to play Skyrim (no arrow to the knee joke)

Only a couple minor things though (which doesn't necessary needs changing) but the legal info could be upped a bit and less closer to the barcode and secondly the Online logo on the front seems a bit to big in my opinion.

I never played this game, but it's good to see some more PS2 boxes on here.

Thanks for the compliment on this, I love making PS2 Boxes, since those are the ones I end up needing irl! XD

Actually I agree with you on both accounts.
I had to resize the online logo from a scan of the first PSU's boxart, so it's understandable that I messed up and left it a little too big.

@D_Nikolaos It's not really destracting from the overall design, so it not really a big deal, just a nitpick ;)

Looks Outstanding, its astonishing how much you have improved overtime.

Thanks a lot for the positive feedback!
But honestly I wouldn't have gotten this far without everyone here helping me out.

This came out really awesome -

Thanks, I appreciate the compliment.