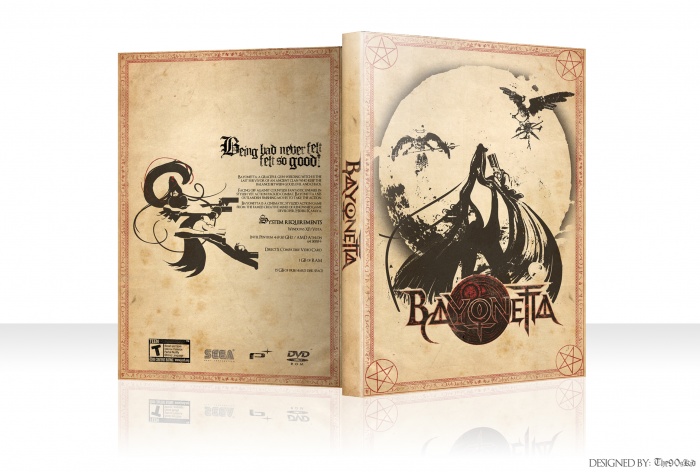 My (late) submission for VGBA 3.0 and also my one year anniversary on VGBA. I started this back before the summer but left it at the front because I couldn't think of a good enough idea for the back. Started it again today after reading Reed's thread about taking VGBA to the next level.
I know there isn't a PC port of Bayonetta (there really should be) but I made one anyway. The whole box was a huge effort, both on my part and my computer's (which crashed several times).
Credit to ctrl-k of deviantART for the back artwork, it was a huge help for me as I couldn't line trace an image because I recently uninstalled Illustrator. link
I don't if it counts toward minimalistic though, I'll leave that to you guys decide. Anyway, enjoy. :)

I swear, I have a Devil May Cry HD collection box in the works with the EXACT same front border.

As sexy as the lady herself.

Damn, this is amazing.

WOW Man wow!
I personally hate this game but this is one piece of art, Very good job :)

Thanks for all the kind comments, guys, really appreciate it.
@AgentLampshade, I made it from scratch 6 months ago so it must be a coincidence. :)

This is awesome, especially the front!

The back is simple but the front is amazing!

Yeah, I didn't want to over complicate the back, just the bare necessities. Thanks. :)

Very nice. I wish I had something more in-depth to give you, but this is solid work and aesthetically I don't see anything wrong. However, you did type out "felt" twice in the tagline.

Fail, I only just noticed that. Thanks for notifying me, I'll probably update it in the future. :)