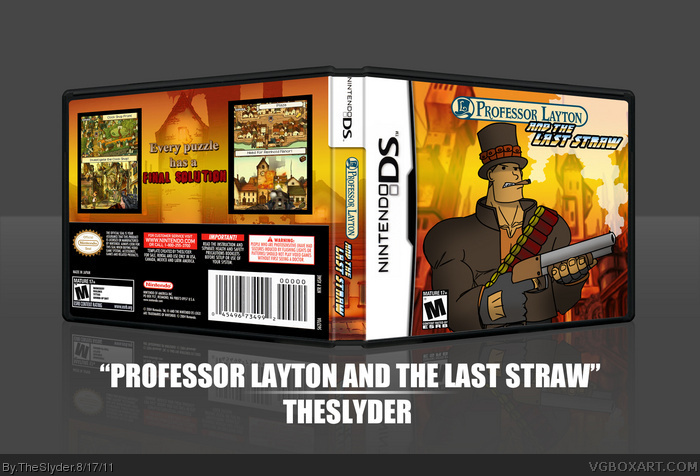 I was torn between this and Mario Party (Mario and Luigi snorting coke off Daisy's thigh, while Wario creepily approaches a passed out and half undressed Princess Peach in the corner of the room.) ultimately I did this because that would've been a lot of work, and I felt like it was too antithetical to the characters. (I love them too much to portray Peach as being date-raped.)

I really wanted this to look more Liefeldian, but I'm still satisfied with the result. Please notice the screenshots. It's hard to tell at a glance, but they're doctored.

The back is a little sparse, but I love the front, which makes up for it in every way possible. So damn funny!

The back is pretty lame, but it's funny.

It's pretty good. The logo still looks very cartoony and non-M rated at the moment though.

Hilarious.
I'd also love to see you do the Mario Party box someday.

This isn't drawn bad enough to be Liefeld. Needs a much bigger gun, more pouches and tons of hatching/crosshatching lines lol. Great pouches on the top hat, though. *thumbs up*

All kidding aside, other than the lack of description on the back, this is fantastic. The idea for Layton crossed my mind, but I'm glad I didn't go through with it, as yours would have destroyed mine.

This is yet another box in the comp that confuses me, Flexx told me that we had to do a real game, where this is clearly a fictional one. Was this accepted with no problems? Cause a ton of fictional versions of game franchises popped into my head, but I had to choose a game that already existed.

As for the box itself, it's close to an idea I had, and the artwork is pretty well drawn. Though, the back is far too empty for my liking, though that's probably the look you wanted so it's just personal preference.

Made me laugh. It could do with a description on the back.

If there's one thing I've learned about myself through this hobby, it's that I hate designing backs. With the exception of 2-3 of my boxes, I can reflect back on every one of them and remember how excited I was to do the front, and then how I had to force myself to do the back after I was done. The back is used for things that I care so little about. Plot synopsis, screenshots, sales pitches, etc. Most of these things have no place in any of my designs, so I'll usually try to do something classy just to have SOMETHING, you know? In situations like this, that doesn't work out so well. I couldn't have given less of a shit about typing out any kind of sales pitch or plot synopsis. I was content with a few edited screenshots and a tagline (That in my opinion, really drove the concept home. link I can see why some of you felt like it was missing something, though. It's pretty sparse.

#6, Thanks. I didn't see the need to change the logo. In fact, the point of the box is the gratuitously violent concept in juxtaposition to the Professor Layton series. Changing the logo would take away from that. The "Last Straw" portion of the logo was made to reflect mid-90's Liefeld comics, which were trying really hard to be "mature" (And by that, I mean excessively dark and gritty.) so it may not really look very "mature," but the concept behind it makes sense.

#9, I hear you. I tend to be so lazy with my drawings, I can't even bother tp put forth the effort it takes to draw as badly as Liefeld. I don't know how he does it. My original sketch and concept had Layton, with a giant laser gun with bullets strapped across his chest, knives and pouches everywhere, etc. Luke, also excessively muscular, with butterfly daggers (Cracked, of course.) and Flora, with giant tits and a waist the size of my wrist, in typical Liefeld fashion. Laziness got the best of me, though, and I decided to just go with Layton and scrape by.

#10, I seem to recall reading something along those lines, but I can't seem to find it now. I had completely forgot about it. I started out thinking about Mario Party, then I went to "Layton game," and then thought "Oh, Professor Layton and the Last Straw" would be a hilarious name! At that point I had completely forgotten about the concept of redesigning an existing game. Oh well, I'm clearly not going to first, second, or third place in this contest, with only one round left. If I have to take a zero-score for not adhering to the rules, then I accept that. I'm just having fun participating.