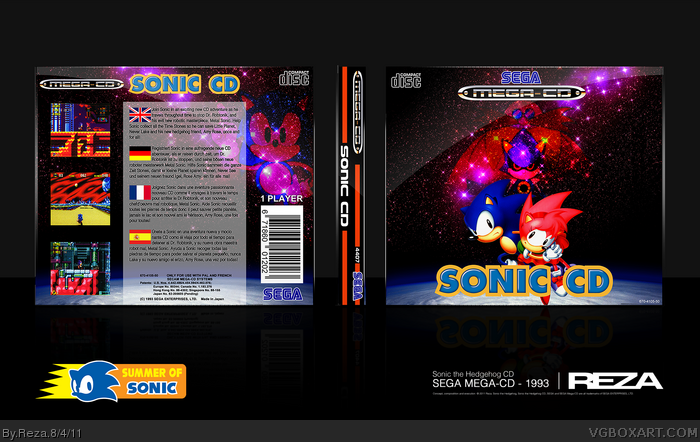 G'day!
Well it's been quite some time since i've last posted a box, and when i saw Luigi53's Summer of Sonic competition, i thought it would be a good opportunity to get back into the swing of making boxarts. Anyway, the brief was to create a classic Sonic game, and given i've already gone through Sonic 1 - S&K link, i thought i'd have a shot at the Mega-CD classic, Sonic CD.

I can't say i've played that much of Sonic CD, nowhere near as much as i did the 4 Mega Drive games (Mega CD's were expensive consoles back in the day), so i had to really think hard of what might suit this box. My most vivid memory of this game was playing the level Stardust Speedway and the whole time travel part, and especially the colours, and as i'd seen an artwork depicting a galaxy in the guise of Dr. Robotnik, i thought i'd try my hand at throwing a similar scene together. It was tricky to get the look i wanted, but after a few hours of toying around, i finally got something i was after. I added Metal Sonic in as part of the galaxy effect as it just seemed to fit, and it was also the only place where the image worked. Sonic and Amy in the main shot for obvious reasons.

The back is a pretty standard affair as i wanted to keep the authenticity of the PAL template down pat. It was mostly a job of organising the screens, blurbs and any other legal info so it would all fit together nicely. Also, i apologise if the German, French and Spanish blurbs are incorrect - as i've had no expose to such languages i simply winged it and used Google Translator (and we all know how accurate that can be!).

Anyway, hope you all enjoy it. There's really not much in the way of artwork for this game, and as i desperately wanted to only use art from that period, i really had my work cut out for me trying to get something that was eye catching, yet loyal to the time period.

Full view please, C&C much appreciated thanks for viewing and good luck to everyone else in the comp!
- Reza

EDIT: Oh, and thanks to Desingersfix.com link for the free to use flash jewel case that i used. Cheers lads.

This Summer of Sonic is making miracles

There's a lot of blank space but it still looks really good.

You've mentioned most of the better aspects I would have myself. I really like the Stardust-inspired colors and imagery, the whole dark theme being something you wouldn't expect from a Sonic cover. It's a fresh look.

The back too, looks great, and gives a nice balance between retro authenticity and a sleeker, modernized design.

This is awesome! Good luck in the comp.

Excellent cover, it just motivated me to play Sonic CD all day, haha

This is so beautiful... I wish I could print it and make it in a real case =o

I love the front and clean looking back.

Thanks for the C&C and favs guys!

#3 yeah i agree with you there, it is a bit bare up the sides, but again it was also hard to source material for this box too. I guess i also kept it simple to reflect more on the covers from there era too.

Also, credit to Sonic Retro link for their massive library of images. Sorry i didn't cred. you guys earlier!!

Fantastic, this looks better than the official PAL cover. Good luck with the comp!

Haha, you used Google Translation, didn't you? :P Very cool box, it has a nice retro touch that I really like.