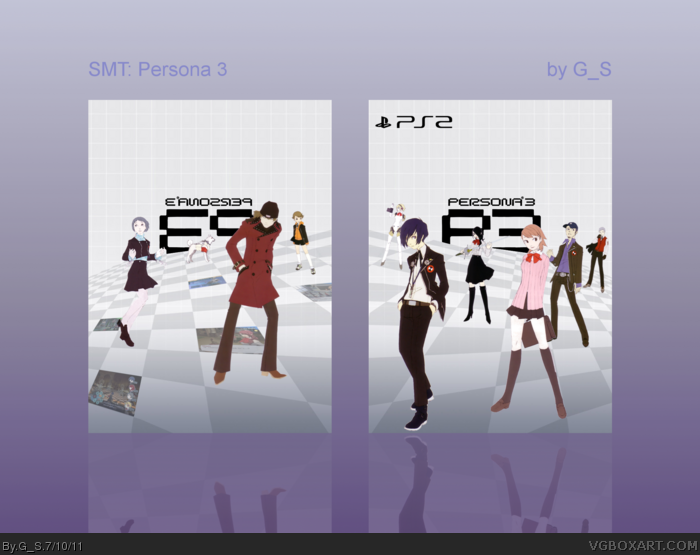 This game is long. This game has quite a few fundamental issues with it that are fixed in the following iteration of the franchise. But it was a fun ride, and a really enjoyable playthrough.

I've actually only ever played the portable version, but a friend of mine has the original PS2 version of this game, and having acquired it used, he was in need of a cover. I DID make a printable version, but the spine is mismatched and was thrown together at the last minute, so I don't want to show that here unless anyone specifically asks :).

Getting the background the right color to match a white-centric box was difficult :/. There was a better purple than the one I used here on a previous version - but I forgot to save that presentation, and I can't remember what the hex # of the gradient was, so I had try to find something as close as I could. I hope it looks all right :).

That PS3 Slim style "PS2" logo was a custom edit - and I'm awful with forming characters, so it took quite a while! Funnily enough, I noticed that Magical's lovely Okami box posted earlier last week used a similar thing.

Thanks again so much for Creative Uncut for providing the lovely artwork (which could've stood to be used more on the promotional material!) And to Atlus, of course, for making the game! As well as the assets on your official website that the background was ripped from.

And to Spiderpig24: I appreciate your lengthy constructive criticism on my Wind Waker box art quite a lot; don't think I ignored it! I just didn't want to bump the box art in the comments with a response, so I'll put it here.
I do understand that floating characters in an issue - after all, people need a place to stand! I tried to make sure with this box art, that it was obvious that the characters were standing on floor. It does look awkward in the WW one, though; I agree with you. On the Japanese Wind Waker box, Link is also floating, but there are no other characters in the background, so it isn't as noticeable. If I ever have the time, I'll try to go back and see if there's artwork of ground I can incorporate into that without obstructing the colorful background that's already there.

The stained-glass artwork and the character drawings on the front also do not match, as you observed :); though I suppose they looked a little bit closer to each other when I used the version with halftone circles. I didn't originally take it to be an issue, as they were separate artworks intended for separate parts of the box art, and I really liked that stained-glass window in particular as a way to create a cohesive back design without cluttering the back with text that might clash over the colorful background or ruining the minimalist design by making it seem "too empty". In this case though, I suppose we merely have a difference of opinion :)!

As for the reflected background: my intent, to that end, was to cast that Wind Waker box art as a sort of "limited edition" tin or slip-over box (which is also why I avoided ESRB and developer logos, among other things). It was therefore supposed to feel as though the background repeated because it "wrapped around", you know, like the artworks that adorn the new GameInformer magazine, or a plain collectible steel case for a film, or something of that nature? I do understand though, that, with the basic nature of that background it particular, they may not have been well conveyed, and instead might've come off as lazy or sloppy. With this Persona 3 box art design, I tried to elucidate that concept more clearly by reflecting the logo as well on the reflected back-side background, as though the Protagonist and first set of characters are standing on the floor in front of the logo, and the second set of SEES members behind it. I thought it was a cool effect, personally :).
As for this kind of design in particular: I like it, but I feel as though I'm wearing it thin. Perhaps I'll do one more box art in a similar vein, but after that, I'd like to explore a different "style" for a little while; maybe move away from something so minimalist and "artsy" (though as I've previously explained, I can't stand that word!) to trying my hand at a traditional, template-included box design. Again, thanks so much for your comment, and I'm sorry I couldn't reply to it earlier :)!

I would have liked to see it blue...but this is nice. The tilted, almost twisted floor is really cool.

Simple, but appropriately so while still conveying some unique elements found within the game's art style. I love Persona 3, by the way, one of my favorite PS2 and PSP games.

The tilt reminds me very much of the X-Men First Class poster.
Great box, simple but effective.

Okay. Yeah. This is all kinds of amazing.

P3P is the only PSP game I ever play ever, by the way.

full of win.
Might as well author FAV you Geno as well