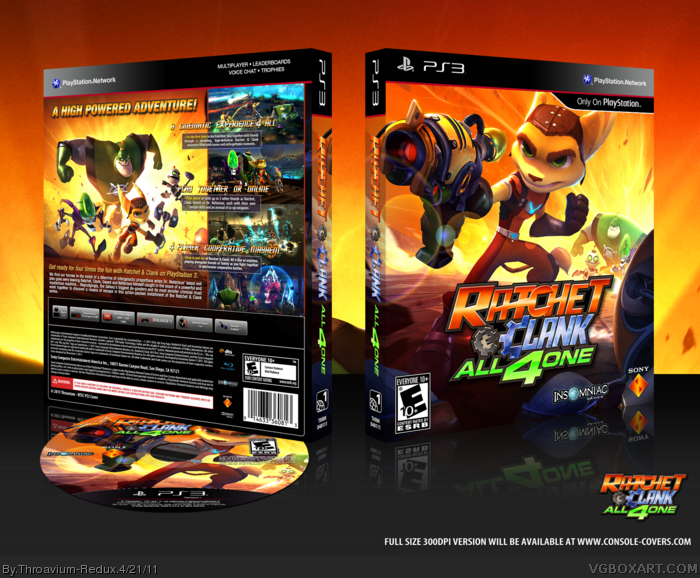 Comment on Throavium-Redux's Ratchet & Clank: All 4 One Box Art / Cover.

I love the colours on the front. Very official looking.

Woah this is good, great job!

#1, Agree. Colors are really vibrant and strong which works well with this type of game.

This looks great! I agree with "very official looking"!

This is awesome. One of my favorites from you.

I'm still not convinced about the game itself, but this cover certainly puts it in a better light for me. Great colors, and I especially like how you've arranged the back, giving the artwork some breathing room and yet still being able to fit screenshots and text in comfortably.

This needs to be in a Hall.

Another brilliant case, one that I could see being used within real life application.

Congrats on another solid entry into the hall. The vibrant colors and back layout really stand out to me on this one.

Once again, I found some decent resources, (namely two different wallpapers), and tweaked them to my liking. I made some major edits, the front has a lens flare, lighting adjustments, color and level adjustments, filters, and renders in the front, that I rendered out from a hi-res version of the wallpaper of the back. I covered images I cut out from the back's wallpaper with the screenshots.

Both the back and front were sharpened to a degree and made brighter and I added some vibrancy to them to draw emphasis for the cinematic effect.

The back is a take on one of Marker's techniques, of putting features evenly spaced between screenshots, to be visible but at the same time not obstruct the view of the screenshots themselves. Thanks to him for this.

The font I used for the description works perfectly, it also has a sub-tagline. (SONY COMPUTER ENTERTAINMENT AMERICA), text is absent from the front's developer logo because it always ends up looking choppy. Legal information was done from scratch like always, I tried my best to predict what the legal information would look like when the game is released in the future. Specifications are based off of speculation, presentation is inspired from SONY's own rendition of their PS3 covers in 3D, just without the fake looking plastic.

Thanks to everyone for their comments and deeming this worthy.

Fantastic. I don't think this game will be that good though compared to the other ratchets, solely based on the co-op type gameplay which is a big turnoff here for me.

#17, I've noticed you only favorite the best of the best, I'm glad this attracted your attention.

I love the colors, and the layout and character composition are all very professional looking. Very nice job, and congrats on the Hall!

Can't find the printable on console-covers.com?

#22, The printable will be available on the day this game comes out.

#23, Okay, Thanks for the info. Is there a special reason why you do this?

#24, Yes. When I make covers, I put the printables on around 9-10 different websites for people to download.

I wait for the official cover to be scanned by anyone, (usually either at console-covers.com, or covergalaxy) and then I make sure that the legal information, barcode, and everything, matches the official, before I actually release my own cover.

In the past, whenever I uploaded my covers early, someone would rip them and claim them as their own. So to prevent people from ripping, I withhold the printable until I'm sure that everything is right. No joke, people have ripped my work, and then changed the front and called it theirs. Nowadays, they can't touch my material if I keep it to myself until the release date.

#25, I see, but why the barcodes have to be the same?
you don't actually scan and sale the covers, do you?

and the legal info is just changing the game company's,
publishers and game title name, am I right? I agree that
it does look akward with the wrong legal info on the back,
but it's not really that big of a deal, or is it?