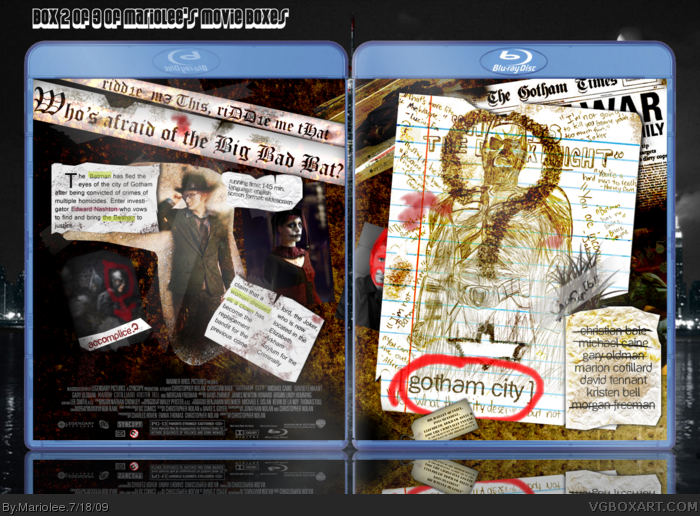 So here it is, the color version of my Gotham City box. This is my masterpiece, I put my sweat and blood into this. So, how do I top my Subspace box? Well, I returned to my previous idea of a Batman 3 box that I felt was poorly executed in my previous box. This time, I think I hit it on the nose.
First off, pretty much 50-70% of this box was mafe from scratch, and that includes the newspaper headlines on the back that I made while I had no internet connection, the Batman drawing on the front (which sparked my reinterest in making this kind of box) and a lot of the teture effects. Otherwise, I essentially just had fun drawing on all the pictures. One pic I want to point out is on the front, thereÂ’s a picture of Christian Bale, and I drew a red batman mask. What inspired me? Well, it was a Daredevil graphic novel that had a photo of the lawyer who was the Daredevil, and had a red mask drawing around it. I thought that was cool. Oh, and using a cloud brush, I made blood effect. I thought that was cool too.
On the front, youÂ’ll notice the logo isnÂ’t the traditional Batman logo, but I didnÂ’t want the logo to be distracting of the overall theme of the bo, so I made it look like writing, the same font that I used for the name credits on the front. Speaking of the names on the front, I still didnÂ’t want anything to distract on the front of the box, I did a hit list thing that crossed out the people who were returning for the third movie, and not the speculated people coming in for the third film because it looks cool. Again.
The credits on the back distract a bit was forced because of how I could get a paper behind the tect without killing it. Also, some hard work is put into the credits on the back. I replaced some of the three names (the three respective people who died/were caught in the second film) with the three new guys along with replacing the Dark Knight with a title that was floating around called Â“Gotham CityÂ”. So, thereÂ’s that. I hope you guys like it. I put alot of work into this, plus some of my vacation offtime. So please fave!
Credits:
Jevangod for the Template
dafont.com for the [ank*] font
The person who made the The Dark Knight Returns poster that inspired me
The person who (on Deviantart methinks) who made the Catwoman/Harley Quinn pics
Me for making the box and thee Batman picture on the front
Google for a few of the pics
Adobe Photoshop for Editing

Damn, this is really nice.

I think that a author fav is necessary. Box is fantastic.

Thnx afifan, roarshack, and yoyo. I love how my friends are the first ones to comment on my box. :P