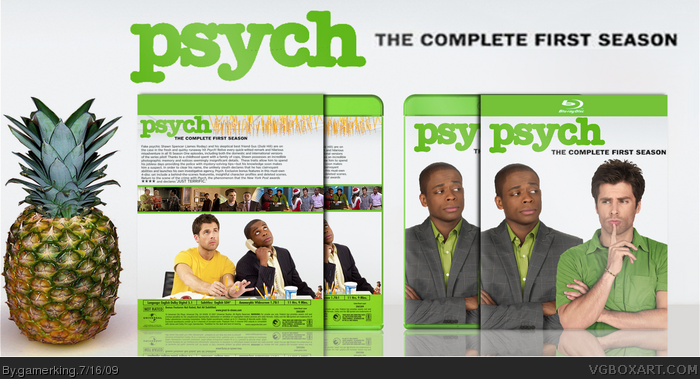 nice and clean. I like the color tone you did with my template.

Dont expect that many comments people dont comment much in the summer. If you made a terrible box they will though, ;)

Someone else did this before with a similar style, but I do like your approach better than what I can remember.

I understand it's supposed to be clean, but I think on the back the text should either be stretched out or there should be something to the right of it. In any case, I'm in love with the presentation. Really nice job.

Yay, I love this show too! And the pineapple... for some reason it just fits... idk. But awesome, anyway.

Yes it tis. lol thanks for the favs guys. :)

Yaaay! I love Psych! Great box man, can't wait for the next couple of seasons.

This is exactly what I was talking about, those two pictures slaped in a nice looking template got more favs then my Watchmen, Misery, Batman Begins, and Hard Candy box. No offence to you gamerking, I really don't have anything against you, I just don't see why your movie boxes get so much more attention then people like me, StaXit, sk.ar.

I have to agree with Pan, this has gotten a surprising amount of favs for basically being two wallpapers and a temp.

Several parts of the box are low quality and blurry, like the back template and the Psych logo. Also, Shawn and Burton are cut out rather badly, which I don't really get since the image ended up looking identical to the wallpaper that Pan linked to anyway.

Your boxes are usually pretty cool, but this doesn't show much effort and hopefully you'll do more for your next box.

#11, They're cut "rather badly" because i rendered them with a lousy mouse that is very sketchy and all over the place. It's not just two wallpapers. I had to render alot myself and with this mouse it's a lot of work, such as rendering both Shawn and Gus from the wallpaper and moving them closer. Therefore it's not considered a wallpaper anymore...
@Pan: I'm sorry your boxes don't get the attention they deserve but that's not really my fault. I put a lot of effort into this box and if you don't like it than that's fine.

#10, Does it matter. Thats all we use to do when we joined the site.

#12, I'm not saying it's your fault my boxes don't get attention, I'm saying yours don't deserve the attention they get. I know that sounds harsh, but I really don't care anymore. I took that pic you used for the front, and with one click of the magic eraser tool, they were completely rendered. That didn't take any effort, skill, or creativity at all.

#13, Yeah, but most of us didn't keep doing that until we reached rank 9 and somehow got 18 boxes in the hall of fame.

Looks a little familiar doesn't it?

gamerking I've given you tips on how to make your boxes better in the past, I don't see why you don't try and make something that is actually great and deserves the praise it gets. If you don't want me commenting on your boxes from now on, I won't, but it would be nice if you really did something amazing sometime.

#14, It really doesnt matter. If the box looks nice, it looks nice, period. as long as the art isnt repeatedly used over and over again.

#14, yeah uh...just so you know, there IS no magic eraser tool in gimp soo...yes, it did take time. I'm sorry I'm not frickin amazing at making boxarts like others but what I can do, people seem to like.

@jevangod: thanks for the supports. :)

I'm sorry I don't think this deserved the HoF (This is not an attack against you gamerking). In full size it is extremely choppy and blurry. Although I really like the green scheme, I can't ignore the low quality. Please, clean it up. :)

ooh! I just came back and noticed this. lol thanks guys!

@runawayred: no worries. i realize it's kinda blurry and I already said why it's choppy. =P

Seriously, it's not cool to post official boxes man. Wait, what'ya mean this isn't official!? Seriously, this is awesome. +Fav

Gonna have to agree with RunawayRed about the choppiness.. but screw that for now. It looks just fine when its not in full view.

I dont think any of your boxes deserve the HOF all it is a wallpaper or poster slapped on with a nice looking template. Sorry man

not to be messed up totally agree with pan...at least put some more effort into these boxes so it can justify being in the HOF get high quality pics try to render as best as possible and also at least type your own font for the back im not saying you cant just copy it word for word just type it out and change the look of it.

#23, The fact remains that 90% of the Rank 9+ artists on this site got where they were by posting new, unseen wallpapers on a template with very little creativity. Hell, half of them barely create their backs at all, they just steal material from the official site and throw it on. And people love it, because they haven't seen the wallpaper before, or the person "edited" it by adding a filter over it, or blending in some blood. Your argument is old, and while valid, doesn't seem to ever apply to anyone else on this site, and seems unfair to apply here. Judging on what I see here, this is a very professional design, and looks exactly like what I would expect from a Psych DVD, and is frankly a lot better and more stylish than the official.

Pan, no offense to you, but you choose some really friggin odd games to do designs for, and that's probably half your problem with attention. VG is a popularity contest, everyone knows that. You want more attention, make games and boxes people have actually heard of, instead of random JRPG's that no one has ever seen. (Not saying you make JRPGs, just speaking in general. Most of the "ignored" boxes are JRPG boxes, and let's face it, no matter what you do, they look generic.)

#25 first of all im not jealous and you must be frekin blind to say that Pan's boxes are bad, they arent they are fine pieces of work. So a unedited wallpaper is a professional design? that dosent sound right. At least Pan puts work into it gamerking just slaps anything on a template.

#20, Jesus Christ, gamerking. If you know theres a goddamn problem, fix it. Don't make bullshit excuses to cover for your laziness.

#27, bullshit excuses? how is it bullshit? my mouse sucks. i can't help that and i'm not gonna run over to Best Buy and buy a new one. and i work in gimp. everything ends up somewhat blurry in gimp. and jesse. how is this an unedited wallpaper? you all just need to calm down and get over it. it's a hobby site...

#28 I was referring to your complete second season box and also this box is a wallpaper also. Lenney sure was right about you.

#26, First of all, read my comment again. I never said Pan's boxes were bad, I said he had odd choices of games. Second of all, an unedited wallpaper can make a fine professional design. That's what they are made for, is it not? Nearly every "Wallpaper" you see is an official box somewhere. And second of all, it's not really a wallpaper, it's an official image, not unlike any render on Planetrenders. Just because it's a promotional photo does not make it a wallpaper.

Jeez, look what I caused. Anyway first off koopa, I don't want my page filled with tons of mario/sonic/zelda boxes just to get quickie hall of fames, I make boxes for the games/movies I like and plan to print out and use my covers for.

As far as odd games go, compare my Killer7 box to Ladykillers, that is relatively unknown game and he still managed to get 3 times as much favs as I did just cause it was his. Compare my Silent Hill series of boxes to DMS's recent series of Silent Hill boxes, his get far more attention then mine do. I'm not saying my boxes are better then theirs, theirs are great and very deserving of the attention they got, but why aren't mine? Why does this Sweeny Todd box: link have more favorites and WAY more comments than this one? link

And I'm not the first to complain about, and to gamerking about his box making tactics, and I never told you to change your boxes or not post them gamerking, I can't tell you to do that. I am only suggesting you put more effort into them, what makes me mad is you don't have to work as hard as the rest of us to get a great deal of attention and praise.

gamerking, I hope my outburst doesn't make you think bad or me, or make you think I don't like you. It's just I know I'm not the first to tell you of this, and I even tried to help you out by giving you photoshop, and you still do the very least amount of work. It's not hard to type up offical text, or make some screen/special features boarders, just try it sometime and I'm sure you get the hang of it and make something that really deserves the attention it gets.

Then again, I guess I can't really say what deserves hall of fame and what doesn't, since it's all about how popular you are with the site. If you have fun doing what you are doing, then just keep at it I guess.

#31, well that's why i hand drew my other one to prove than i can put effort into my boxes. lol i don't think bad about you and I know that your boxes get way too overlooked and with that whole Sweeney Todd thing i have no idea. lol That was one of my favorite boxes on the whole site for a long time when he made that. it's a shame it's not in the hall yet. oh and with photoshop. when you sent it i tried opening it but my computer wouldn't let me so i had to stick with gimp. :/ and the problem with typing the official text is that in gimp if you pick a small size font so that it'll fit the box, it gets really blurry and you can't read it. just look at my Get Smart or Die Hard box and you'll see why. xD

but no, i don't think badly of you. I love critique...just not angry outburts like Ayron. =P

Can't give you a fav on this because the work is too blurry and/or choppy. While I don't like the tone Apollo put to it, I agree with his thinking. Don't make excuses. Buy a new mouse or do something else to make it easier/streamlined to create better work. I KNOW you could have at least made the logo better than it is.

As for Pan, I think he's a little bitter, and rightfully so. It was just kind of pointless to make his point about his lack of attention here. For the record, I think that more people SHOULD look at Pan's work, most of it is flawless and one of the more consistently good artists here.