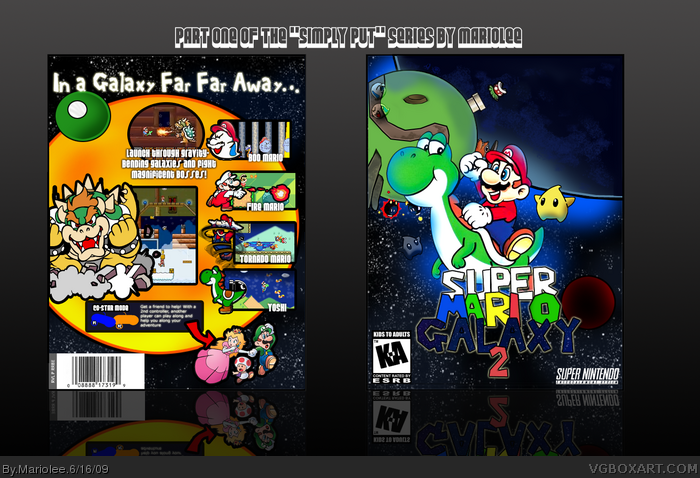 This is probably the biggest box I have ever made. Period. I made a tin cover, a back, and a front. After seeing Koopa's work of using old Metroid games to represent Metroid Prime, I worked on this because of all the generic Super Mario Galaxy 2 boxes (except for one that was for the N64, shame I forgot the creator's name).

And as you can see on the bottom left, it's the first part or box in my upcoming Simply Put series where I get retro art and use that for the latest game of that franchise.

Also, side note, more of the stuff on this box was made from scratch or edited heavily such as pretty much every planet, the Mario Boo and Tornado Mario, the logo was remade to be retro, and I had to redraw those star people to fit the mood.

I also added the K-A rating instead of E is because most games on the Super NES had that rating!

PLOX FAVE, I'VE NEVER GOTTEN A BOX IN THE HALL OF FAME NO MATTER HOW HARD I TRY!

Man... oh man.... if this was just a BIT better quality, I would fave. As it is, it looks great, the design is great, but the choppiness of the art, and mixture of the different art styles, takes it down a notch for me.

you are really good with that but this is just me the way the charicters look ( how the look like in super mario world ) on the box kinda creep me out 0.0

What Koopa said, get that update and fav.

This is really good!

I'm kind of disappointed you didn't even respond to my critique on your WIP thread, much less try to implement any of my suggestions. The back...looks pretty good.

The metal slip is still a distraction in my opinion.

UPDATED.
#9
I actually didn't read your critique until AFTER I posted the box. I removed the trail and the thing behind the logo like you asked, and I cleaned the renders up a bit and removed the out of place Bowser Jr. and Bowser with an actual render from Super Mario Bros.

I kept the metal tin because no one else complained about it.

I think it's awesome! There are a couple of things, though! Work on those and I think it'll look fantastic.

The 3D screenshots on the back make it completely weird, though. I know it may be hard, but I thought it would be really cool if you made your own Super Mario World-ish screenshots. Shouldn't be hard by just getting sprites of Mario, Yoshi, Fire Mario, etc. and placing them in different positions on a 32-bit starry kind of background or something.

If I was creating the box, I would either do that or remove the screenshots completely. It just kinda .. ya know, changes the way it is ... But there may be a way to make them fit in. Maybe remove those inner and outer glows on the screenshots and give them nice thick black borders?


#2 - Metal Slip
----------------------
// I agree with tleeart. The metal slip is kinda distraction. The main thing that stands out and makes the box unique is that it is a cartoony / SNES-ish version of Super Mario Galaxy 2. Randomly creating a metal slip (that doesn't look too great, IMO) kind of takes away from the point and the feel the box should give.

>> The planet on the top right corner has an inner blue colored stroke. The planet's cut off, so the stroke created a right-angled path along the edges of the box. It looks kinda odd.

>> Super Nintendo logo seems very scrunched up there. I think you should move it a bit down and a little to the left. Also, if it was white colored, it may match the box a little more. I'm not so sure about this. You can always try it out and see if you like it, though.

>> Outer Glows and Drop Shadows on the back ... I personally think you should remove them. Thick black strokes would look better in my opinion. It doesn't look too bad on the "In a Galaxy far far away" text, though.

>> What is the BG of the back of the box supposed to be? Lol. I really can't tell. It looks like some sort of planet, though. Might just be my problem, though ... Green ball on the top puzzles me, haha.

Don't be upset that there's a huge wall of text above. Just because I typed a lot, doesn't mean I don't like it. I love it, actually. Those are just the things that would perfect it. Your box has creativity, style, and is pretty unique. All its lacking is a little professionalism.

Dang, I feel hecka bad for getting this published, I really want to delete this now because I feel I made it too bad. I'll fix it up as best I can though.

Also, on the back is the sun level at the end where you beat Bowser and the green thing was suppose to be another planet where Bowser hits the glass part hard and his tails catches on fire.

#12, Don't feel so bad! You did a commendable job so far, and it's hard to rely on WIP threads alone, because so many times nobody pays attention to them.

YoshiStar gave you a lot of critiques, but I think that's only because he sees the potential of this box. Obviously, he faved it because he saw some good thoughts and ideas went into this. I'm going to do the same here in a sec. I think this can only improve.

I got everyone of Yoshistar's critiques except the logo, because I'm actually going on a trip right now and wanted to get this out of the way, and the logo took too long.

Thanks for all the encouragement tleeart, Yoshistar, Ninty, Koopadasher and everyone else! I really appreciate it!

This is seriously awesome! I think its looking much better. It's sad that you want to 'get this out of the way' now, though ... Here's a logo I just made for you. Use it if you wish!

Snap Yoshistar, anymore help and this will be a collab box! :P I'll update it in a few seconds.

Wish you could move Mario and Yoshi a little higher or make the logo a little smaller since they're getting blocked out quite a lot.

Awesome. I love the retro feel and artwork.

I did feel that the logo was blocking Yoshi and Mario quite a bit.

EDIT: Sorry Yoshi, the PSD image is kinda messed up so I can't change it no more. Vista, you're failing me!
#18 Thanks, that's what I was going for. :)

@ Koopadasher's request, I added a starry sky to the background instead of a regular sky of the screenshots.

#22 I saw this on the comments section and was amazed someone replied on this after a month. :D Thanks kingkow!

The Updated version is right on the dot, great job man!

This is FINALLY in HoF.

A well-deserved hall of fame!

YAY!! Congrats on the hall of fame!
The only thing I have to say, is that the logo annoys me. I don't know why, it just does... lol

'Bout time this got into the hall. Congrats.

Tucker (did you change your avatar), YOYO, TMRD, and Roarshark, thanks! And tmrd, check out version 4's logo, that might be better. Thank you for giving me my second HoF guys!