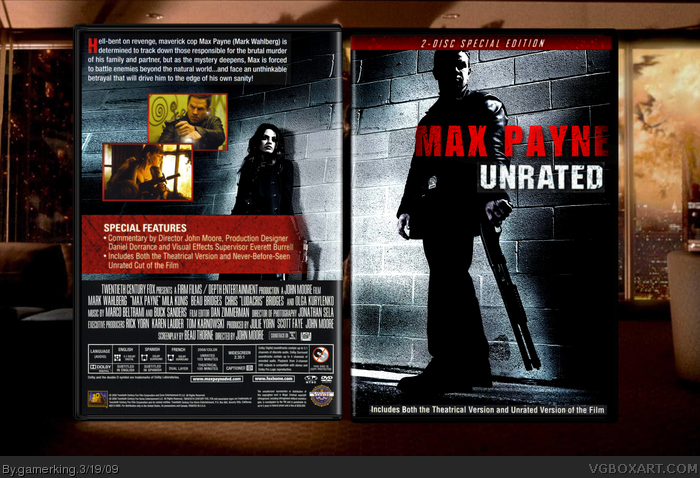 I loved this movie. :D

something on the front is missing...i dont know what...front's a little too plain and the title seems awkwardly off center

I really like how the backgrounds/images of the two sides match up. Nice one gamerking!

and i was gonna put a special edition bar ryan...but then i remembered that people think my boxes all look the same so i took it off. xD as for the placement...i like it. :P

Love it, but whats with you and all the DVD boxes lately, not saying its a bad thing though

Nice job, though the back could use some work. Maybe some better screen borders/colors.

#6: well those are the official screen borders...

you and SilentMan are the kings of movie boxes :)

#7 Doesn't mean they are good. Not really feeling the back,quite plain.

well you never seem to feel my boxes. lol

and thanks guys! :D

Amazing! I really love the feel of this one.

another great box from you gamerking.

The front looks good, but it seems as if something is missing on the back, mabye try adding another screen shot.

thanks guys. and i'll add another screenshot later. :)

Yep back seems a little empty

alright, alright. update will be up tomorrow hopefully. :)

Well, after pondering some of the reasons I both like and dislike this, I've finally found the right words to use.

Well, first I'll tell you what I like. I like the fact that the box is uniformed from front to back, the classic Max Payne brick background is put to perfect use here, and I like the "under exposure" of the logo. The front has a nice and simple design which compliment's Max's somewhat solitary life. It's not clustered or complicated, however I do thing there were a few things left out.* The back is good from the special features down.* I love that special features box!

* On the front I think you should have included one of those "Wide Screen Edition" bars at the top, just to round the design out. The front, as nice as it is being that simple, is almost "too" simple.
* The top half of the back looks a bit unorganized, and rushed. I think there's a tagline missing, which, in my opinion, all action genre movies require. (I just think it helps to add a nice little ring to everything) The plot text could be centered across the box, or margined to make room for the tagline (if it were staggered or something), and the snapshots could use better borders. Perhaps something that goes with he setting of the movie/game setting more than just red bars.

Overall, I'd have to say it's decent, but without some of those key elements (borders/tagline/editions bar), it just looks all to empty, and less like the actual Movie box, but more like the paper cover slip.

i was going to put a special edition bar, but then everyone would have complained that my boxes keep looking the same. >.O

why did you ban master-chief-rocks-halo for?, you're tight, he said he was sorry. why?

#24, gamerking can't ban people, that guy got banned for stealing other people's work.

i can't ban people. lol it was his own fault for stealing boxes he didn't create

updated! i added the special edition bar for ray blade. :)

:D It looks much better now.

Y'ALL HEAR ME?! IT LOOKS MUCH BETTER.

I agree with ray, it does look better. Great box as always gk

The screenshots look a little off, I think it's the way they're staggered or something, and even though the film is in color, I think if you made the screenshots black and white, they would work more with the box design.

I do like how the image spans the front and back though.

Great job man, What effect did you use on the logo?

#32, I see what you mean about the screens, but I think keeping it in color makes it a visual point of interest. Gotta say, you really found your strong suit. I like the texture in behind the Special Features tab.

I need to see this movie sometime or another. I'll probably wait til it gets on cable, though.