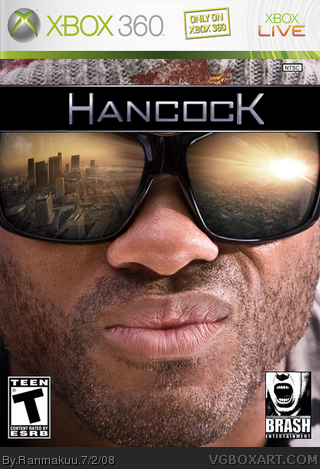 The movie came out today so I've decided to make this box. I figured Brash Entertainment would make it because they always make bad movie based games. But now after two months of hitaus here's my Hancock boxart for the Xbox 360, also on Playstation 2, Wii, and Nintendo DS.

This is not a real game. Also it will follow the events of the movie with minigames like throwing a whale the farest as you can. The game DOES NOT have Xbox Live I just used this template to fool people.

Go see Hancock today or when hell freezes over when Dribit Taylor 2 comes out.

#1, I make it like that because it could be like those sports games that come out every year. I used a new concept that I put the logo on the top other than on the bottom.

"But now after two months of hitaus here's my Hancock boxart for the Xbox 360, also on Playstation 2, Wii, and Nintendo DS."
*looks at template*
"Only for Xbox 360"

Boy was I fooled!

You know, It's not very nice to fool people into thinking it has XBL... Bad!

#10, Ranmakuu insulted my intelligence! What a meanie!

Ranmakuu, please stop posting those comments with 'It will come out in...' 'The game does/does not feature'. It annoys me because... I don't give a shit what kind of game it is. Listen, try making good boxes from now on, or let's put it this way: put some effort into your boxes. This new box has a lot of minor and major flaws, like you only see Will Smith's head (his face on this picture is like he has to go to the bathroom), the logo isn't cut out, and like you said yourself in comment #2, the game does not support Xbox Live. So saying that you want to fool people... yeah right, it just was the template you could find the fastest. And also, in your comment you said AGAIN who 'made' the game, and again: I don't give a shit if it's not a really existing game, and neither does any other person because if they care, they'll ask, and they don't ask because they just don't care.
Sorry for this very long comment, but you really annoy me with this. You made over 150 boxes, and only 2 of them are actually good (Juiced and Target: Terror, in my opinion).
Put effort into your boxes, and look at people like MARKER and ELCrazy. They take a lot of time for their boxes (so it seems, at least).
And this box? Well, since the lack of effort it'll be a 3/10.

You haven't known Ranmakuu long enough to know that he had his chances to listen to us since he joined this site on December of 2006. He threw it all away because of his childish nature. Ranmakuu won't listen to us, he just likes to piss us all off. Let him be in his own little world, and ignore him.

#14, You reeeeeeeeeeeeally shouldn't be talking you know.

I've seen the movie today. It was interesting it's a action comedy and it got serious later on through the movie. So when it came out almost a week ago it made me to make this boxart for adverstisement of the movie.

"So when it came out almost a week ago it made me to make this boxart for adverstisement of the movie."

i thought you got a banned?