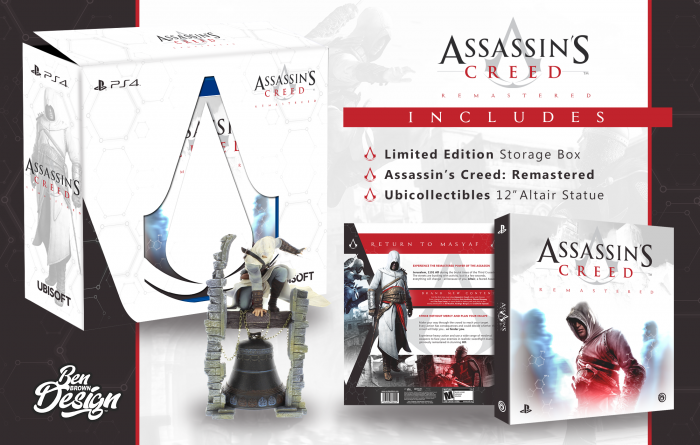 Sticking with my current theme of doing Assassin's Creed artwork, and having seen The Ezio Collection, Rogue and III be remastered, I thought it made sense to make some artwork for a potential Assassin's Creed (1) remaster.

My idea was to house the set in a big box, similar to Mortal Kombat 11's new release, which would include a copy of the game itself, more than likely a game guide (which I didn't design/add), and a collectible item - in this case, the Altair bell tower statue that was released by Ubisoft in 2014.

I understand that the box itself isn't totally visible, so feel free to check out the printable to see the full version.

This is pretty alright. I do like how the box itself looks like, especially the back. However, I'm confused as to why it is in a blue PS4 box inside the sleeve when the preview of that box lacks that? I think instead a die-cut on the sleeve, it would look better as a different material (say, if the box was glossy, the logo would be matte—which Ubisoft tends to do with their content). Mainly, because the die-cut needs to work with the underlying piece and I don't think it does as it stands right now.

The cover is designed to be a slipcover/slipcase mate that's why. Seems to be the case with most official things unless it's a steelbook.

@BenBrownDesign Oh, I'm aware that it is a slipcover (I referred to it as a sleeve), but the way it falls over the object doesn't work, imo. It doesn't add anything to the design when applied, because the underlying object doesn't look incorporated into the overall design.