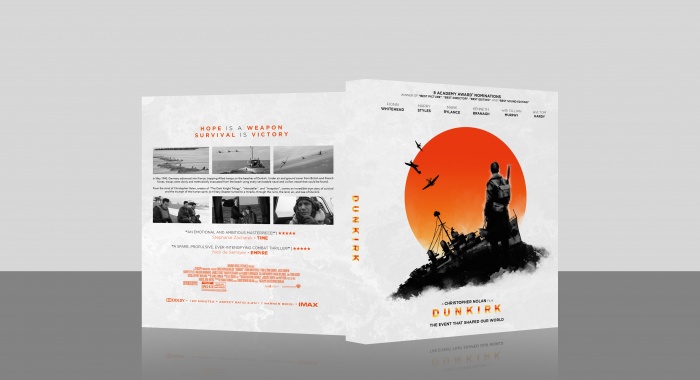 It's nearly time for the 90th Academy Awards, so here's "Dunkirk" by Christopher Nolan, a movie that I really hope wins one of the awards I've put up there but probably won't because "3 Billboards" and "The Shape of Water" exist (but both also great films).

The artwork does take some elements from the "Empire of the Sun" poster, thought to give a warmer colour a go for a movie mostly tinted in cool.

wow. you are well done sonny i like this shit...

Love it V, welcome back man :) will you be posting more?

Cheers Vince! Maybe, website's dying tho but I'll keep posting now and then.

@Venom I've got some WIPs I want to finish. it's the most alive the site has been in ages.only dying cause if all the spam, seems to be less if it recently

I must admit, this is the first thing I've seen from you, but I'll definitely be checking out your earlier work and looking out for your future work.

I love the simple colours you've gone for. It's something I've been practicing myself recently, and I'd love to pick at your brain for some tips. I love the orange gradient against the greyscale/black elements. It works really well and creates a nice effect.