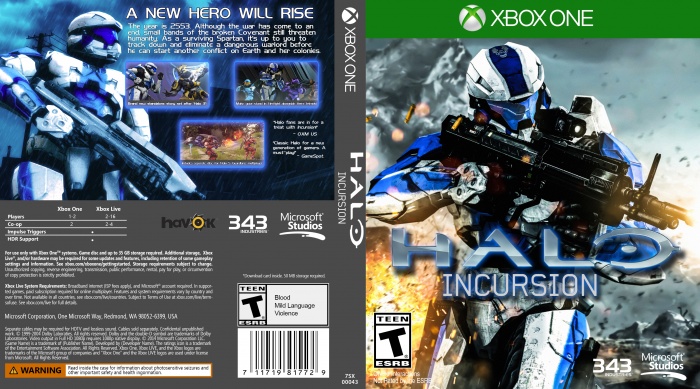 A little project I spent the last 24 hours on. I’ve always wanted to see what it’d be like if my personal Spartan was the star of his own standalone Halo project. Set in 2553, a few months after Halo 3, it would follow Ben (as a surviving Spartan-III from the Human-Covenant war) on his mission to take down a threatening warlord who seeks to wage another conflict against humanity.

The campaign’s length would be similar to your average Halo, but would also feature Firefight with up to four players. Plus, like Halo 3: ODST did back in 2009, Incursion would also include a separate disc that comes with the full online experience for Halo 5: Guardians.

Edited together in Photoshop, with screenshots made in Garry's Mod and Source Filmmaker (I did not make 80% of the images).

Pretty good but the logo blurs a bit.

I did notice that the front logo is hard to see. Any idea on how to improve that?

Not that bad. I'd recommend finding a higher quality logo for the front since it is quite blurry. Also put a stronger drop shadow on the logo so it stands out more, cause its kind of blending with the backdrop.

The back isn't so bad either. I'd just work on the organization. It just feels a bit boring and off.

How would you say the back can be better organized?

@jevangod I updated it. How does it look now?

Fav'd for update. Looks better and pretty good for a first box. keep up the good work and I look forward to seeing more from you