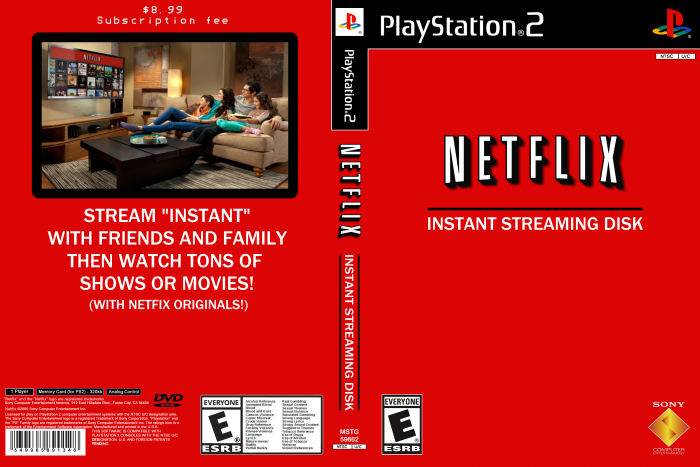 Ok guys this one is better than the last one, it is netflix for the ps2!
Let me give you some backstory... so... back in the day when they were selling instant streaming disks they had a rare version of a streaming disk for the PS2 only released in Brazil but one person decided to rip the iso off of the disk which you can download right now on link for free!
Just keep in mind this particular app is legal to burn to a DVD-R
only because you still have to pay for a subscription to netflix and the app is free now anyway, but sadly they discontinued their support for the PS2 a while back but you can still burn it and say you have it, the app will launch but
when you sign in it will say that it's discontinued.
Thank you guys! :3 - Jordan

Hello Jordan. I'll begin with the fact that I like the backstory, it really brings some perspective to the design, which I surely appreciate.

To begin, I think its a little plain all together. It begins on the front with the title and subtitle; but, while aesthetically pleasing, brings almost nothing new to the table. Understand me here -- I get that netflix disks really wouldn't incorporate more, but what good would it be to provide such a niche design to a site meant for customization and creativity?

I think with proper formatting of text on the back, which comes with practice (trust me, I was no master at it either at my time, if you'd like to take a look through my older designs) you will come to see what I mean. It is very crucial to a cover to have that concept down, and I urge you to try a plethora of different styles to find one that you'll find characteristic to you. And, as you do so, we hope to help you along the way so you can become even better!

Thanks for your submission!