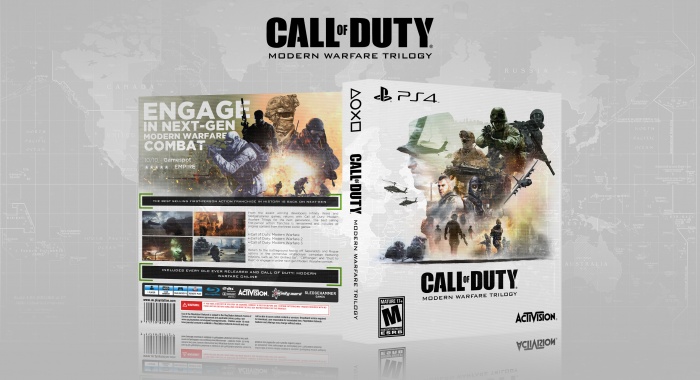 It has been a long time since I made a Call of Duty box, Black Ops III, Infinite Warfare and Modern Warfare Remastered. All three boxes deleted except for my first box ever in this site, another Black Ops III box.

I decided I wanted to make something look more like a movie box than a game box and the Modern Warfare series is no short of set pieces making it easy to find renders and pictures to make it look like a blockbuster picture poster.

Thanks for the love so far everyone :D

This is awesome. Great work V, keep it up

The box design looks perfect to me, I don't know if you need all that space outside the box though.

nice work Venom this time I smell a HOF :)

Ahaha hope so, thanks Pogo :D

I'm not a fan of these types of war games, but this box looks quite stylish.

Nice. I like how the back if laid out and the front's composition is pretty great. The only thing I'm not sure about is the green you used on those brackets on the back. They're really bright in comparison to other colors and kind of stick out in a bad way as a result.

Thanks Lucid! I'll go work on an update!

if you made that front yourself - it's killer!

Congrats, this is well deserved!

Holy shit! Thanks everyone! :D