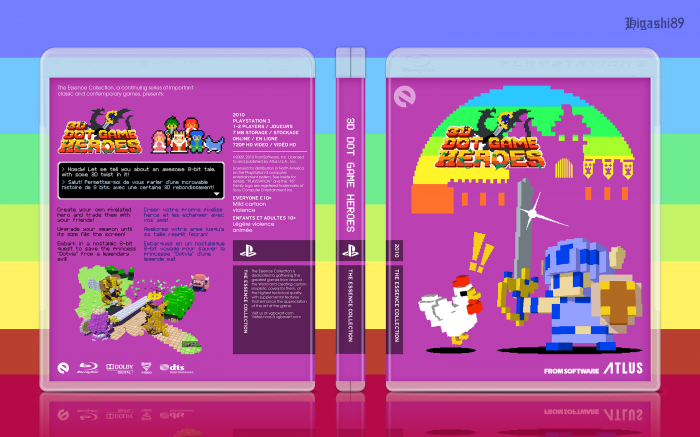 Well I wanted to try something different this time.

Remember back in, i don't know, 2009 maybe? You see, back in that time there was this "Essence Collection" going on and lots of members were doing this, and I never did myself. So I though "why not? Maybe VGBA people will feel nostalgic by seeing an Essence Collection box at this present time" so yeah that was the main idea.

Now for the game itself, I picked up 3D Dot Game Heroes, a forgotten RPG game made by Atlus back in 2010. It was unique because it took the idea of a 8-bit game going 3D but still maintaining its 8-bit visuals. With that in mind, I did all custom art for this box, in a way it looks like 8-bit. Notice the curves are actually stretch lines going along with the direction, just like 8-bit games rendered diagonal lines at the time, since they were just a bunch of square dots.

Well enjoy, I hope it doens't give you an "incomplete box art" vibe. It's an Essence Collection so I though maybe making it simple would go along with the essence idea.

Thanks to master_general for the Essence Collection template.