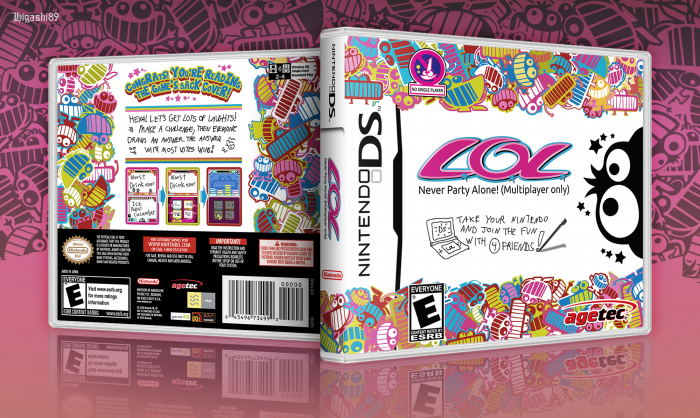 This is LOL, also known as "LOL: Never Party Alone!". It's a party game for the Nintendo DS.

The concept is that you have this game, and 3 more friends with their own DS. They download the game via Download Play, the host (you) makes a challenge, everyone must draw an answer, and the drawing (or answer) with most votes wins. The game asks for a new host and the game repeats.

I think it's a fun game, when done right, with your best pals and all that. I made this as a homage, because it's a game that picks my interest, both in concept and name (I mean the game's called LOL, whats next, a game called AYY LMAO or WTF?)

Here's the game's official site, it explains how the game works and it was there where I got most of the information about this game: link

This is some quirky stuff right there awesome stuff Alex, only thing that bothers me is the two "worst drink ever" screenshots.

The screenshots works as a how to play using step-by-step instructions. The first screen is the host making the topic "Worst Drink Ever", and the second screen is showing all 4 player's answers for that topic, and the third screen shows that the 3rd player has won that challenge (notice the crown) because it was the answer with most votes. Also, notice the blue arrows.

@Paper No problem, I just felt the need to explain, since I couldn't do it properly on the box itself

This box made me LOL so it deserves a fav!

oh my, the puns

Looks really cool, I can see there was lots of attention directed to detail.

Looks great, love the quirkiness. I'm too sure on the pattern overlapping the template on the front, though. It looks okay on the bottom but along the top it comes extremely close to the NDS logo.

This is pretty interesting.