Movies » One Flew over the Cuckoos Nest Box Cover ← → 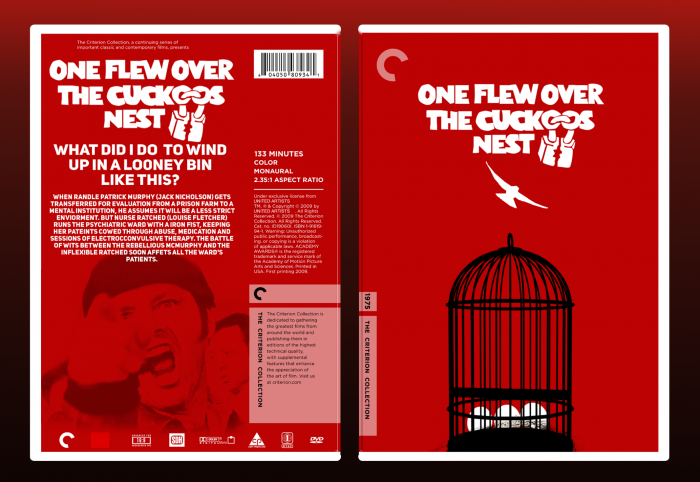 This cover was absolutely amazing to create, I wanted to go for a style that was visually different from anything else that I have done before, Kind of more of a focus on minimalism and simplicty, I wanted a stylistic change so badly it wasn't even funny. I went through multiple concepts before I finally created one that represents the film perfectly, I recommend this movie to anyone who hasn't seen it, Thanks and don't forget to comment and favorite.

EDIT: Credit to Qwerty for the PS2 Template which I edited, Also a printable has now been added enjoy!

One Flew over the Cuckoos Nest Box Cover Comments

Comment on jesse777's One Flew over the Cuckoos Nest Box Art / Cover.

Looks great, love the simplicity. Not a fan of the repetition of the logo on both sides, but aside from that it's really good :)

I dig the front a lot, the minimalism there works well. The back's alright, but I would say having the logo again there is a bit repetitive, but I think that also appears on the original covers so it's alright. I would say that I feel like the summary text shouldn't be in all caps myself, but that's pretty much personal preference. Aside from that, not bad. :)

I really love the way this looks, very simple and elegant. I've had this movie on my to-watch list for awhile now, guess I should get around to that.

I'm not a huge fan of the simplicity in this case. I feel the flat colour of the background and the large amounts of empty space on the front just make it look plain. Keeping in mind that I've never watched this movie so know nothing about the plot or themes, you might have wanted to make the background much more grungy and make the cage much larger to fill up space, and put the eggs(?) inside of the cage instead of behind the floor.
I don't really see the point in repeating the logo on the back, and the capital letters description text is somewhat jarring.

I think you can do better, so I hope you don't take this the wrong way.