[ Buy Doctor Who at Amazon 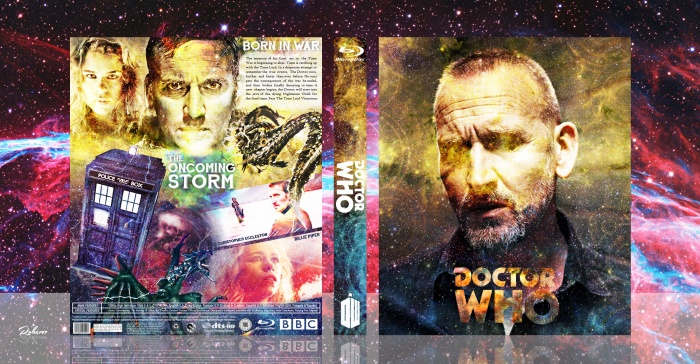 Went for a theme revolving around The Doctor coping with his new regeneration, hence the colour choice of gold and yellow to represent the regeneration and themes close to the Time War and the War Doctor. And then the movement into blue that represents the Ninth Doctor. I’ve always had this idea in my head that 9th Doctor had been in his current form for a lot longer the he remembers or realises. This gained even more traction when the War Doctor was introduced and his memories on the Day of the Doctor were altered. Basically I think that ‘Nine’ went travelling around as much as he could before he lost the memory that he tried to save the Time Lords rather than thinking he destroyed them.

Great work Rob, this is beautiful. One of your best imo

Thanks a lot Vince.

Although I don't like Doctor Who (don't kill me), this looks brilliant! Love the colours :)

I try to be as British as I can so I watch it while complaining about the government and drinking excessive amounts of tea. Thanks a lot!

Cool stuff man. I like what you did with the eyes on the front.

Thanks very much, yeah I felt it suited the box really well.

This is so sparkly, but I love it.

It's overwhelming how much detail is in this. Completely dazzled. :)

This looks quite creative and colorful, i like it ;)

Don't watch the show or anything but that is a SICK cover.