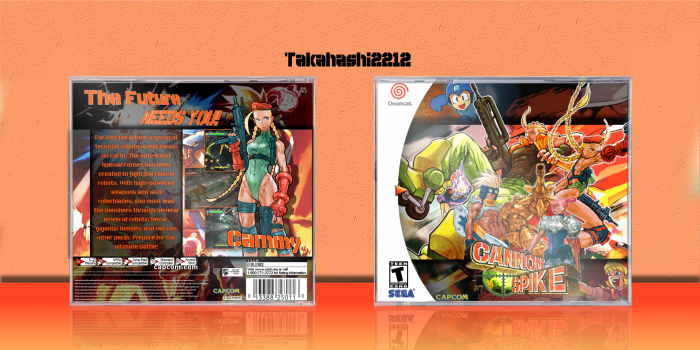 Cannon Spike is a twin-stick shooter first released in arcades in 2000, and then ported to the Dreamcast. The game is named after the signature move of Street Fighter character Cammy. This game most notable for being a Capcom crossover, featuring the likes of Mega Man, Cammy, B.B. Hood, and Sir Arthur. The game also features Vega as a enemy and one of the villains.
The game itself is actually pretty fun, although it's mercilessly difficult.
This box has been sitting un-uploaded for about a month, so I thought I might as well just upload it.

I've never heard of this game, but I'm gonna assume it's awesome since Cammy is my main in Street Fighter. Nice job on the cover, it comes together well. I think the text on the back is spaced out a little too big but that's only minor.

Not much of a fan of the Street Fighter incarnation of Cammy. I do like using her in Marvel Vs. Capcom 2 though.