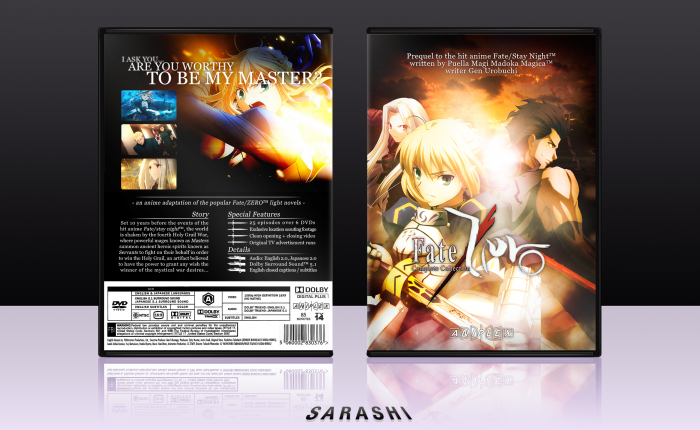 Sorry for the broken full-view, here's a direct link
Hey all, I decided to make a box. I hope the anime choice doesn't offend anyone (I know at least one person doesn't hate it). It's actually very similar to my last box superficially, but all the elements and fonts are different (take my word for it though). The template also was a pain, I had to end up scanning a region 1/A Blu-Ray/DVD combo box and editing it, which is why you'll see that some of the text is about Blu-Rays. I've uploaded the template I ended up making for the box (not in the above preview though- in the printable and full view link I posted) to the Resources section here: link
The back is actually the part I made first on the box, with the tagline (which indeed _is_ supposed to be blurred) based on a wallpaper I saw a while ago. I'm pleased with the top half of the back at least. Front was a bit of an rushed afterthought but it looks alright I guess.
I was going to make DVDs to put underneath the box, but I couldn't be bothered to make 6 unique DVDs, so I called a pass on it.
Credit to Eggboy'13 for the template (even though he claims it isn't his).

Plz give the printable I want it for my shop plzzz

Love it. The lighting effects are really nice.

Wow, this is really nice. Love what you've done with blurring on the back. Nice job!

People die if they are killed

Alright, I'm not going to bother with the site's printable function because it's probably broken, so here's the printable link for all you sad people who still believe that there is a 6 DVD collection of Fate/ZERO : link
Things to note: I spent the last 2 hours redoing the template just for this. Saber on the front has her arm cut pretty harshly, which is more obvious in the printable, and the Saber on the back doesn't blend with the rest of the black on the back due to some magical reason which is outside my comprehension.

Thanks, it was likely your favourite that pushed it in.

Congrats, this is really well deserved.

Saber would be proud