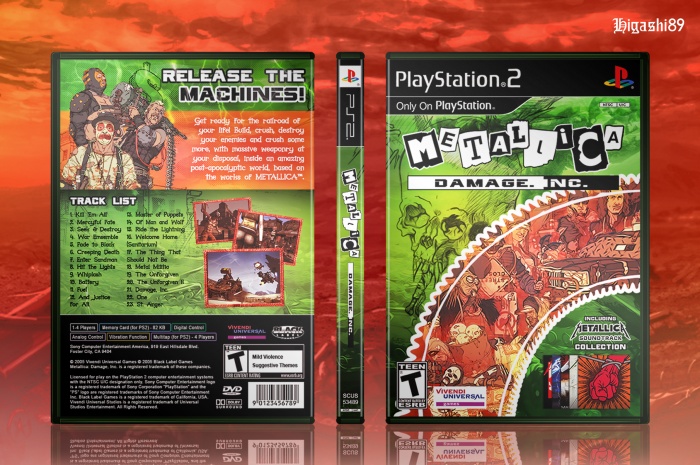 This is for the Cancelled Comp sponsored by Paper. It's based on the game "Metallica", aka "Metallica: Damage, Inc." as told by Unseen64: link

It's also known as "Metallica: The Game" as told by this video's title: link

It was supposed to be a Borderlands meets Twisted Metal kind of game for the PS2. It would (obviously) involve music from Metallica, which is a kickass concept for a game IMO. Too bad Black Label Games got defunct, making this and possibly other games bite the dust.

Thanks for VGBA's Resources for the PS2 temp and DVD case. As well for Unseen64 making those artworks available for me to use.

Now this is some good stuff right here. This looks like it could have been an awesome game(except for the St. Anger part, god that album sucked) and you made a great job portraying it as such. Great job, Alex! :D

This is awesome. I love the red band that spans the front of the case. One thing to approve could be the track list could stand out a little more? That's only minor, though. Overall a fantastic box, great job Alex ^^

Sweet job on this. Love the colors and the format. I fits very much the classic PS2 styles in terms of composition, but still refreshing in terms of design. Good job, Higashi. :)