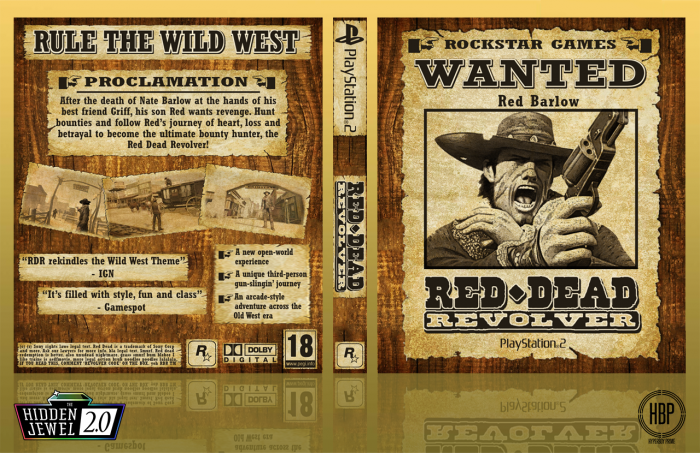 My entry for the Hidden Jewel 2.0 Competition. So the story about this one is that I had no idea which box to do, I originally wanted to try a Spider-Man game. I finally began to make Spider-Man (The 2000 Game) but I wasn't inspired to continue it.I was looking at Spider-Man boxes on the site when I saw this. That give me the basic inspiration which I then continued until I got this. I'm pretty proud of the final outcome.
I tried to make the screenshots bullet holes but I couldn't execute it well enough to make it look good.
Anyways, Enjoy!

Thanks to Paper, FrankBedbroken, TheTombRaider and AgentLampshade on the WIP Forum. Without their help, the box wouldn't be the same :)

also I know the background sucks but I couldn't find a good enough one :\

Yes. This is so freaking amazing! I love it, your best box so far. Great job! :)

Thanks Nathan! and also thanks for your help! :D

Great work man. I agree with Nathan, this is your best work

great job. I liked the effect of Far West and the announcement of 'wanted'. The source also fits perfectly with the design and representing the game. fav! ;)

Wow man , I thought this is call of juarez or something , really nice , great job dude :")

Make one cover for my my friend ? Please, i am Brazilian, Ronaldo, Pelé , Popozuda, War @[email protected]

I did not go anywhere from here. They just banned me a bit.))) by the way you did some great work..I want to see from you more work you have talent