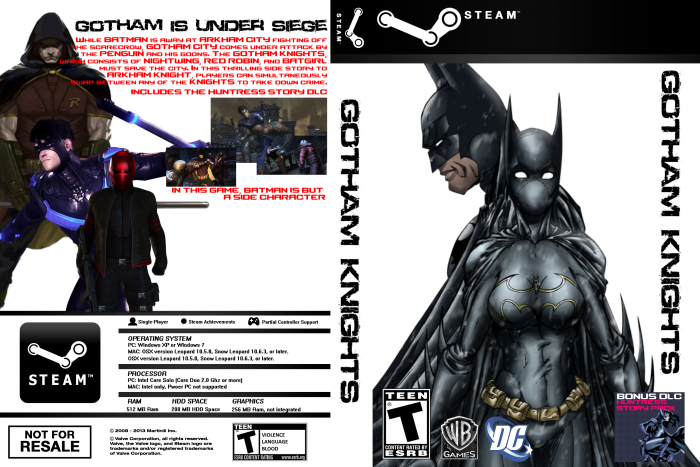 Gotham Knights is a companion game to Batman: Arkham Knight developed exclusively for the PC. This game is to Arkham Knight as MW3 Defiance is to MW3.
In this game, players take control of Batman's various sidekicks, including Batgirl AKA Cassandra Cain, Red Robin, and Nightwing. Batman will, from time to time arrive to help but he is not a playable character. While Batman is away at Arkham Asylum to deal with ScareCrow, The Knights must stop a coup de tat lead by The Penguin and Red Hood. Gotham Knights allows for instantaneous switching between the three characters at any time as well as full player freedom to roam around Gotham.
Included with the game is bonus Huntress Story DLC, which includes 10 missions where players can use Huntress, who is a side character in the main campaign. It also unlocks the ability to use her in Free Roam as well as Co-Op Play.
This is, of course, a fake game.But the concept is pretty good and so is this box. I hope you all enjoy it.