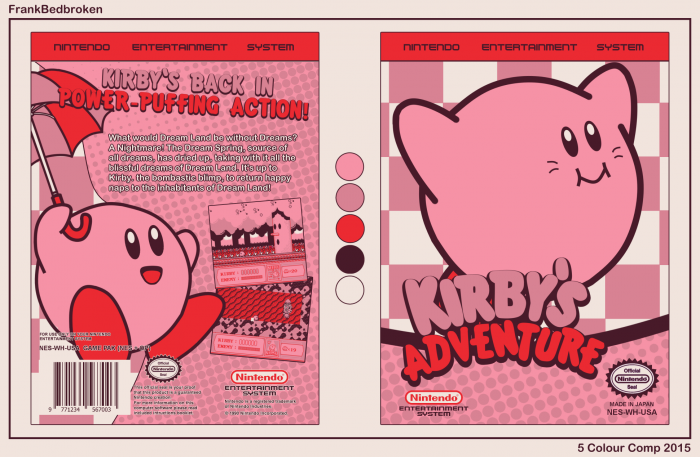 I decided to start with something for Paper's 5 colour comp. I went with Kirby's Adventure on the NES, although originally it was going to be Kirby 64, but since I had to draw the crystals also, and given the color scheme I went with, that wasn't going to end well, and I really didn't have an idea about how to implement the template in a clever way. Since the presentation also counts in on the five colours, that meant that I had to make a different one for this one, not really a fan of it but well, it could be worse.

Anyways, as always, constructive criticism is welcome and huge thanks to Paper, TheTombRaider and Ront-I mean, Huegh for the help and the feedback on the forums, it's very appreciated. Also, credit to Leegion for the template.

I think it looks really pretty. :D The only thing that I don't like are the legal info logos in the back, but that's just me nitpicking because I prefer minimalistic styles. Great job! Fav'd.

Thanks, Petrus! I was going to make a minimalistic template but I felt like the official template worked fine, maybe it's the white-ish outline that makes it bothersome. :D

No problem, good luck for the competition!

yes hello i am ront

Thanks, Paper! Good luck to you too! :D

This looks really nice. I love the classic feel to it. Good luck in the competition!

You did it great! Good luck for the competition! ;)

Thanks, Ulquiorra, and good luck to you too!

Really nice job on this Frank, I wish you the best of luck in the competition! :)

Thanks, Nathan! Good luck to you too, I'm wondering what will you come up with! :D